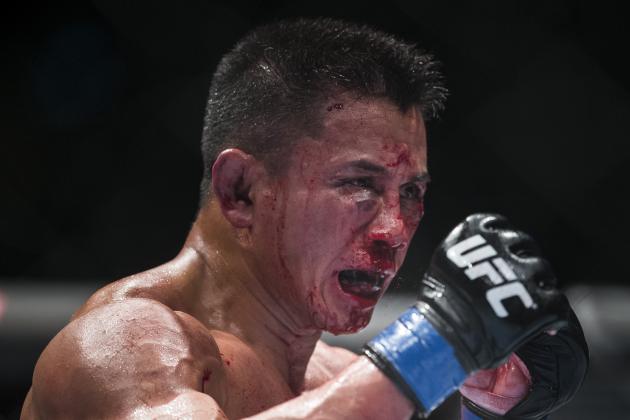 Cung Le: They can think what they what, I just got caught in the right lighting…..

In this rather interesting flashback video to before his UFC Fight Night 48 TKO loss to Michael Bisping, Cung Le goes off on a tangent about fans accusing him of using PED’s. The allegations stemmed from the now infamous picture of the 42 year-old looking like a 22-year old body builder, and it turns out that those accusations of cheating were true, sadly.

Indeed, Le got busted for using HGH (human growth hormone) and received a nine-month suspension from fighting. This whole situation makes what he said in the above video, courtesy of usatodaysports, a whole lot more hard to swallow. Previously thought of as a respectful yet hard-nosed scrapper, the Sanshou champion’s reputation has taken quite a knock with the failed Fight Night 48 drug test.

“I just came off the scale, I gave it a flex and someone caught it in the perfect moment. They can talk like that, but do they look like that? No. Before I used to look like that and I used to eat cheeseburgers, people can say what they want.”

It would seem more than foolish to talk like that while taking a banned substance, unless he thought he could beat the drug tests after the fight. Either way, we are yet to hear from Le’s camp regarding this shameful debacle. I’ll keep you posted as soon as any fresh news surfaces on the Cung Le drug test failure.