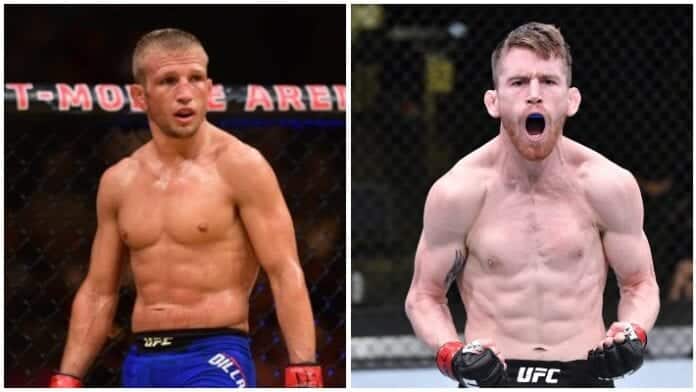 The bantamweight duo are set to main event at UFC Vegas 32 this weekend.

If you’re going to be betting on this fight or any other this weekend be sure to check out Saturday’s fight night tips before doing so.

We have not seen Dillashaw inside the Octagon since January 2019 when he suffered a first-round knockout loss to Henry Cejudo in a flyweight title fight.

Following the loss, it was revealed that Dillashaw had tested positive for EPO. He was later suspended for two years and stripped of his bantamweight world title.

Sandhagen is the man tasked with welcoming Dillashaw back from his lengthy suspension. The winner of Dillashaw vs. Sandhagen will almost definitely be next in line for a shot at the bantamweight title after Aljamain Sterling and Petr Yan rematch later this year.

Ahead of UFC Vegas 32 main event, Sandhagen made his opinion on Dillashaw’s cheating very clear.

“There are lines that you don’t cross in the sport. You shouldn’t try to cheap-shot people. You shouldn’t go outside of the rules while you’re in there,” Sandhagen told ESPN. “And you definitely shouldn’t do anything that is illegal in order to give yourself a huge advantage in a fight.”

Sandhagen says he isn’t overly concerned with Dillashaw’s sketchy past but did admit that he was grossed out by it.

“As a competitor, and really, as a person, really the only word that I could kinda come up for it is – it doesn’t bother me, T.J. has to live with T.J.’s decisions; I have to live with my decisions – but it is like a little bit gross in my opinion to put yourself in an illegal advantage in a one-on-one combat scenario and something that your really love,” Sandhagen added. “I mean, it’s gross. If there’s a word for it, it’s kinda just gross.” (Transcribed by Sportskeeda)

Do you agree with Cory Sandhagen? Is TJ Dillashaw’s dodgy past gross?