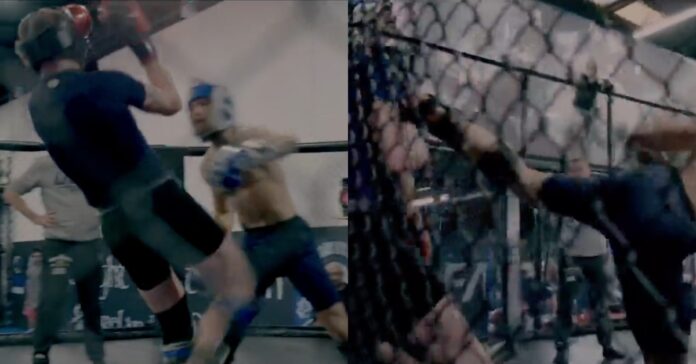 Expected to make his long-awaited Octagon return in the early stages of next year, former two-weight UFC champion, Conor McGregor has sent fans and critics alike into raptures, sharing footage of him sparring at Straight Blast Gym HQ in Ireland, across his social media.

McGregor, a former undisputed lightweight and featherweight champion under the banner of the UFC, headlined UFC 264 most recently back in July of last year against Dustin Poirier – suffering a first round doctor’s stoppage TKO defeat after fracturing his left tibia and fibula.

Expected to make his Octagon return in 2023, McGregor will be tasked with snapping a two-fight losing run for the first time in his professional career to boot, after dropping a rematch knockout loss to Poirier on ‘Fight Island’ in January of last year.

The Crumlin native’s comeback to active competition has been the subject of speculation too, however, with the recently turned 34-year-old yet to be subject to anti-doping testing by USADA (United States Anti-Doping Agancy) since the third quarter of last year.

Conor McGregor teases an impending return to the UFC

Hyping his expected return, McGregor posted two videos of him sparring inside the Octagon at SBG Ireland HQ in Inchicore, Dublin, labelling the facility “the sh*t hot factory”.

“Live from the sh*t hot factory,” Conor McGregor tweeted, accompanied by footage of him landing a jab-straight combination during sparring before reversing a clinch engagement.

In a second video, captioned, “Turning side kick to the face followed by a jumping knee to the breadbasket”, Conor McGregor lands a spinning back kick on his sparring partner, before disengaging and throwing a knee strike to the body.

Without a victory since January 2020, McGregor’s most recent win came in the form of a 40-second high kick and strikes knockout win over the veteran promotional alum, Donald Cerrone at the welterweight limit.