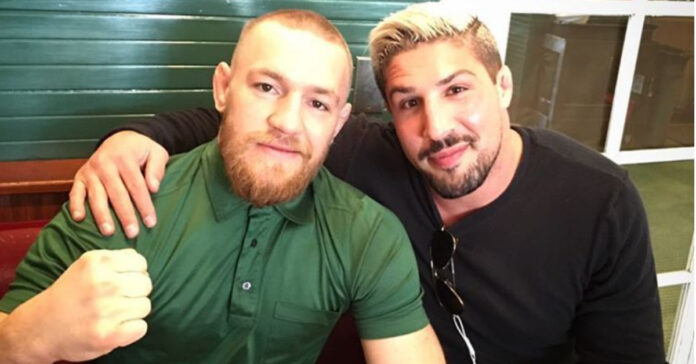 Former UFC heavyweight contender, Brendan Schaub has claimed that if he were in the inner circle of former two-weight champion, Conor McGregor’s team, he would be urging the Dubliner to pursue a fight against former interim champion, Tony Ferguson – with the hope of securing a much-needed victory.

Headlining UFC 264 back in July of last year, McGregor, a former undisputed featherweight and lightweight champion, suffered a first round doctor’s stoppage TKO loss against another former interim 155lbs champion, Dustin Poirier, after he fractured his left tibia in the opening round.

Forced with snapping a run of two straight losses for the first time in his Octagon career, McGregor headlined a UFC 257 event back in January of last year, dropping his first career knockout loss in the form of a second round finish in his rematch with Poirier.

Targeting a return to active competition at the end of this year, if not the beginning of 2023, McGregor has been linked to a slew of potential matchups in his time away from the Octagon.

And according to former heavyweight contender turned podcast host, and stand-up comedian, Schaub, McGregor should pursue a fight with the aforenoted, Ferguson – if not Michael Chandler to boot.

“If I’m Conor McGregor’s team, the smart route to go is – you gotta get a win,” Brendan Schaub told The Schmo during a recent interview. “So if my poison is Michael Chandler, Tony Ferguson – you know, it’s not a knock on Tony, but I would say, Chandler just beat Tony. I would go for Tony, get a win, and then try to fight Charles Oliveira – or f*ckin’ (Islam) Makhachev – Makhachev’s a tough fight for Conor.”

“He (Conor McGregor) has to get a win,” Brendan Schaub explained. “So Tony Ferguson is probably your best bet out of that bunch. You gotta get a win – and Michael Chandler’s tough, man.”