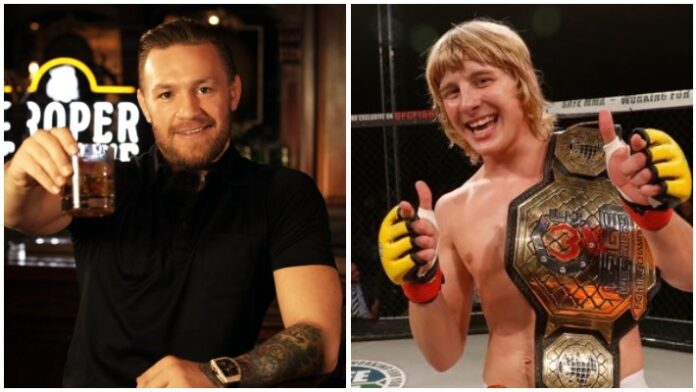 Conor McGregor has wished Paddy Pimblett well ahead of his UFC debut.

‘The Baddy’ is set to make his first Octagon appearance on September 4 when he takes on Brazilian lightweight, Luigi Vendramini.

Pimblett has often been compared to McGregor throughout his rise to prominence.

On Tuesday, another fan did so on social media and McGregor responded by wishing ‘The Baddy’ well and reminiscing about his time in Liverpool for the Grand National in 2017, while also taking a shot at Michael Bisping.

“Good luck Paddy, I was outside your gaff all hours with your man with long hair thats doing 30 year now forget his name Knock, knock, who’s there? Not Mike. Hahaha. It’s brews not bevvies with them. Meatball,”

“Thank you Conor I’m coming to take over the UFC just like u did,” Pimblett replied. “I know who U mean he told me about that in Glasto I wish yous were at the right house as I was on the party scene then myself & I wudda came out an we wudda had a scream I’ll meet u soon tho big man 100%”

Pimblett recently revealed he is hoping to one day square off against McGregor at Anfield Stadium – the home of Liverpool Football Club.

“I’ll be honest, it’s the one who tarnished his own legacy (Conor McGregor),” Pimblett told Submission Radio. “An Irishman versus a Scouser. I feel like that would be fucken rowdy. That would be next level. It would be ridiculous, to be honest.”

“He’s [Conor McGregor] a money type of guy. And fighting an Anfield in front of like 60-70,000 people is where the money’s at,” Pimblett added. “So, that’s why I could see that happening. But anyone. It doesn’t matter. Like, I’m going to be that big of a star that you could fucking put me in there against a hobo and I’d fill it out.”

The 26-year-old is confident he’d easily deal with McGregor, he said.

“I still say to this day, lad, get me in there with Conor McGregor and I’ll submit him in two or three rounds.

Do you think Paddy Pimblett will be able to replicate the success Conor McGregor has had inside the Octagon?