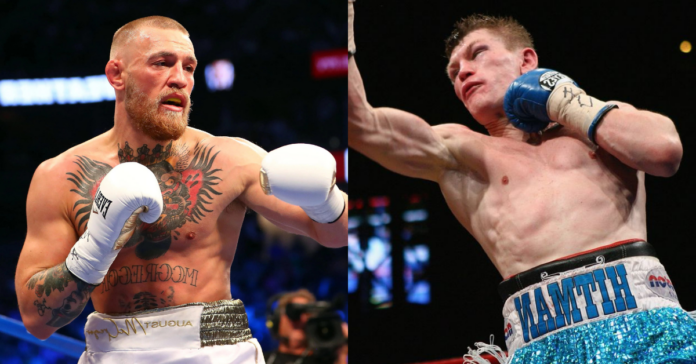 The Irish-born superstar Conor McGregor has been out of action for over a year now due to an injury in his last bout. ‘The Notorious’ teased that a comeback in boxing against the legendary British star Ricky Hatton may be on the table.

On Twitter, when posed with the McGregor vs Hatton idea, the Irishman responded:

“Wouldn’t that be something.”

Many fans have proposed a McGregor vs Hatton boxing fight as the English athlete is getting back in shape and looking sharp ahead of his comeback fight on November 12. In his hometown of Manchester, Hatton will look to turn back the clock as he faces Marco Antonio Barrera. Neither Barrera or Hatton have fought in over a decade.

In an interview, Hatton said he is looking to put on a show for the fans. He explained:

“To be able to walk out in front of the fans again in Manchester is a dream for me. I know my days are numbered but it doesn’t matter how old you are, you still have to keep setting yourself targets to get out of bed at four in the morning and train – and that’s what I’ve been doing. … We’ll both be putting on a show for everyone.” [Transcript courtesy of Manchestereveningnews]

Conor McGregor made history as a two-division world champion competing in the UFC. The Irish MMA star also had a boxing match against Floyd Mayweather Jr. in 2017.

‘The Notorious’ Conor McGregor is currently not in USADA testing pool so a return to the UFC octagon seems less likely. However, a blockbuster boxing showdown against a recognizable name might be the match that makes sense for the Irish fighter.