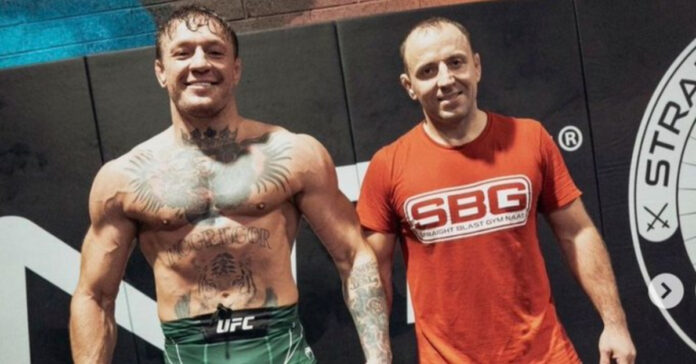 Preparing for his Octagon return next year, former two-weight UFC champion, Conor McGregor has shared photos of himself training at Straight Blast Gym Naas – appearing massive in stature as he prepares for a UFC comeback.

McGregor, a former undisputed lightweight and featherweight champion under the promotion’s banner, has been sidelined since July of last year, headlining UFC 264 against former interim lightweight titleholder, Dustin Poirier.

The 34-year-old suffered a first round doctor’s stoppage TKO loss at the event, after he fractured his left tibia and fibula at the end of the first frame.

Undergoing a surgical procedure to address the gruesome injury, the Crumlin native has recently wrapped up filming in the Dominican Republic, as he prepares to lead the remake of action movie, Roadhouse – alongside Jake Gyllenhaal.

Announcing plans to return to training and fighting multiple times before the release of his Hollywood blockbuster debut, McGregor must first spend a period of 6 months in the USADA (United States Anti-Doping Agency) testing pool before he makes a UFC return, unless he obtains an exemption to compete first.

Conor McGregor is expected to make his UFC return in 2023

Sharing snaps of his return to Naas facility, Straight Blast Gym, McGregor – who confirmed how he would be returning at the welterweight limit of 170lbs, appears to have packed on considerable mass in his time away from the Octagon.

Without a victory in his last two Octagon appearances, knockout ace, McGregor’s most recent professional win came in the form of a 40-second high kick and strikes knockout triumph over UFC veteran and former title chaser, Donald Cerrone in January 2020.

Weighing up a potential fight against the likes of Islam Makhachev, Jorge Masvidal, Kamaru Usman, Tony Ferguson, and Michael Chandler in his time away from active competition, an official opponent for the Dubliner’s anticipated return has yet to be confirmed by the organization.