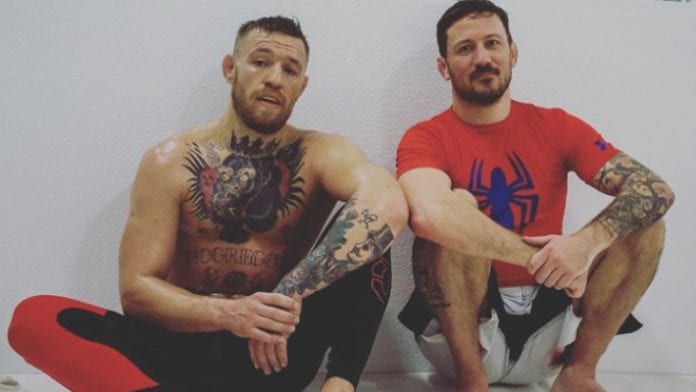 Former UFC dual weight champion Conor McGregor has really retired from the sport according to his long-time coach John Kavanagh. In a recent social media video chat recorded by MMA World the SBG Ireland Head Coach revealed McGregor is actually done with fighting as far as he knows, he said.

“I can’t convince Conor to do sh*t. Conor will tell Conor what he’s gonna do. And who knows? Who knows what’s gonna happen in the future. But, as for now, he’s retired.” (Transcribed by MMA Junkie)

McGregor hasn’t fought since stopping Donald ‘Cowboy’ Cerrone at UFC 246 earlier this year. Just 40 seconds was all the Irishman needed to get his first win since beating Eddie Alvarez in 2016. Since then McGregor has been vocal about wanting to fight again as soon as possible. Unfortunately, due to the ongoing global pandemic that hasn’t been possible. Therefore, he has decided to step away from the fight game due to a lack of motivation caused by a lack of fight options. Announcing his retirement on social media in the aftermath of UFC 250, he wrote.

“Hey guys I’ve decided to retire from fighting. Thank you all for the amazing memories! What a ride it’s been! Here is a picture of myself and my mother in Las Vegas post one of my World title wins! Pick the home of your dreams Mags I love you! Whatever you desire it’s yours”

The majority of fight fans and pundits refused to take this latest retirement from ‘Notorious’ seriously. Since then McGregor has come out to explain the move, UFC president Dana White has confirmed it is real and now his long-time coach has reiterated the retirement is real. It’s starting to look like McGregor may really be done with fighting this time.

Do you think Conor McGregor will ever fight again?