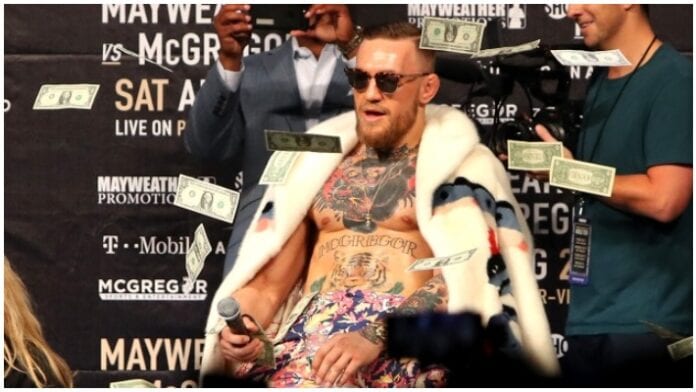 Conor McGregor has explained why he never followed through with the $500,000 donation he promised to make to Dustin Poirier’s Good Fight Foundation.

In the build-up to UFC 257, McGregor and Poirier kept things friendly.

‘The Diamond’ would go on to win the eagerly anticipated rematch. He wrestled with McGregor early before landing several nasty calf kicks. Poirier used his elite-level boxing skills in round two to become the first man to KO McGregor in MMA.

Post-fight, things seemed to remain friendly. Poirier’s wife even went into the locker room of McGregor to thank him for his generous donation that would help build a gym in Poirier’s hometown.

“I just wanted to say thank you so much,” Jolie Poirier said to McGregor post-fight at UFC 257. “Thank you for everything. This is going to help change a lot of people’s lives.”

Since then, things have gone quiet.

MMA fans assumed McGregor had made his payment and Poirier had quietly started work on the Louisiana gym.

However, last night the former interim lightweight champion took to social media to blast McGregor for failing to follow through with his donation.

“That’s a fun prediction! @TheNotoriousMMA you also predicted a donation to my foundation and you and your team stopped responding after the fight in January,” Poirier wrote on Twitter. “See you soon. July 10th Paid In Full!”

McGregor responded by blaming Team Poirier for not sending any type of plan for how his $500,000 would be spent.

“A donation, not a debt,” McGregor replied. “We’ve been awaiting the plans for the money that never came. I do with all my donations. Know where it’s going dot for dot. Otherwise it goes walking. As is the case with a lot of these foundations, sadly. You took the McG over the belt shows I was right.”

Poirier stood by his original claim, saying McGregor’s team stopped responding to emails and he was therefore unable to provide details about how the donation would be spent.

“100% never a debt,” Poirier wrote. “You offered, we accepted, and like I said your Team never responded to our emails regarding the process of where funds would be put to work! July 10th you will taste defeat yet Again”

Do you think Conor McGregor is out of line for not following through with the donation?