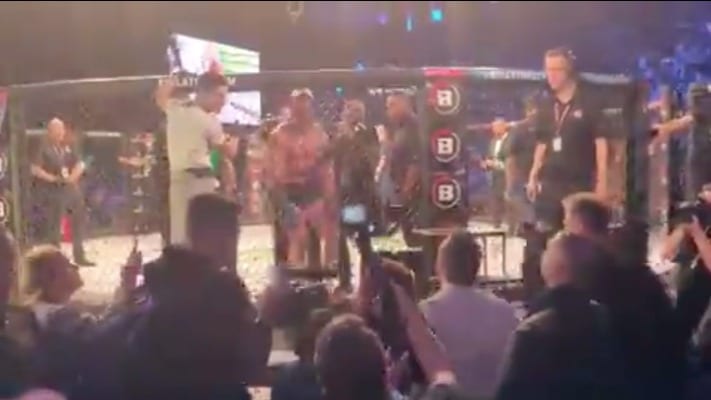 We mentioned Conor McGregor showed up to Bellator Dublin earlier today to support a few of his teammates competing on the card.

McGregor witnessed one of his teammates, Peter Queally, pull off a comeback second-round TKO victory over Ryan Scope after nearly being finished himself in the first round. As a result, McGregor got up on the cage to hug his teammate, before standing cageside to shout a few words of congratulations to Queally.

As you can see, Bellator security was firmly prepared for a McGregor move given his history as an attendee of the promotion’s shows.

McGregor has attended Bellator events in the past and has caused quite a bit of trouble while attending. In 2017, McGregor was at Bellator 187 to support teammate Charlie Ward. After Ward won the fight by knockout, McGregor jumped into the cage to celebrate the victory with Ward.

However, referee Marc Goddard was still trying to determine if the knockout happened before or after the bell. A skirmish ensued after Goddard attempted to remove McGregor from the cage, as the Irishman wound up punching a security guard in the midst of the chaos. Thankfully nothing like that happened this time around.

What do you make of McGregor going up cageside to celebrate with Queally?