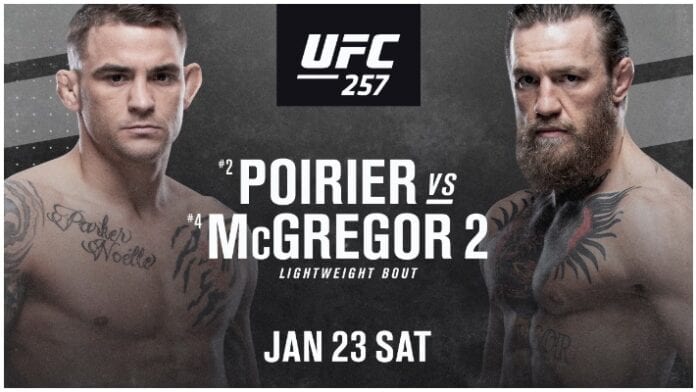 The highly anticipated rematch between Conor McGregor and Dustin Poirier has been announced as official by the UFC.

McGregor and Poirier will face off on January the 23rd in 2021. They will meet almost seven years after their first clash, in which McGregor beat Poirier via TKO in the first round at UFC 178.

It was reported last week that McGregor had signed the contract to fight Poirier via TheMacLife however the UFC has only announced the fight as official today on their social media.

Since their first fight in 2014 in which McGregor swept Poirier aside in one round, they have both had positive careers.

McGregor went on to capture the UFC Featherweight world championship when he knocked out Jose Aldo in 13 seconds. He then went on to lose and avenge the loss in back to back fights against Nate Diaz at Welterweight. McGregor then became the UFC’s first double champion when he knocked out Eddie Alvarez at UFC 205 at Maddison Square Garden. The Irishman then went on to lose to Floyd Mayweather in a boxing match before returning to the UFC with a loss to the Lightweight Champion, Khabib Nurmagomedov.

This will be McGregor’s first fight since UFC 246 where he knocked out Donald Cerrone in 40 seconds to mark his return to the sport.

Poirier has also improved massively since the pair’s first bout. Poirier went on to beat names like, Justin Gaethje, Eddie Alvarez and Max Holloway, in which he won the UFC Interim Lightweight World Championship. He did, like McGregor, lose to Khabib Nurmagomedov in a title fight but has since returned to the winning column with a win over Dan Hooker in a fight of the year contender earlier in June this year.

Do you see a bout between Dustin Poirier and Conor McGregor being any different from the first?