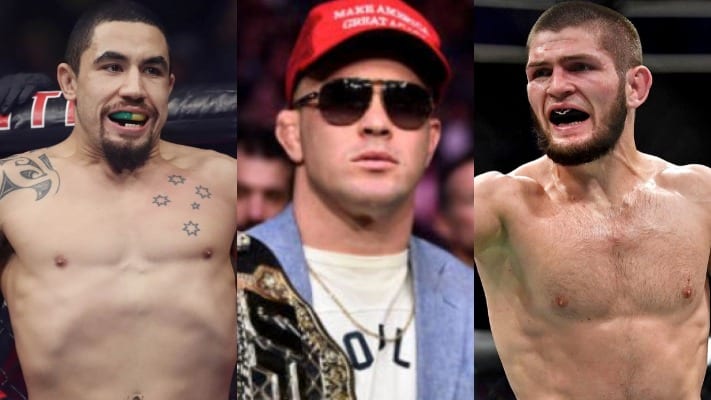 Colby Covington has no issues calling out anyone and everyone competing under the UFC’s banner.

“Chaos” even believes he can drop down to 155 pounds and challenge Khabib Nurmagomedov. Or, he could jump up to middleweight and fight Robert Whittaker. As he told MMA Junkie this week, Covington believes he’d walk through both of them.

“I can go down to lightweight and I can go up to middleweight,” Covington said. “I’m looking to fight Whittaker, he’s a bum. He’s got no wrestling, he’s got no heart, no cardio. Then Khabib? Come on.

“The sheep lover? He’s got nothing for me. The guy is over is Russia playing with sheep. What’s he going to do to raw American steel and twisted sex appeal? I got a lot of things in the plan.”

Khabib will defend his lightweight title against Dustin Poirier at UFC 242 on pay-per-view (PPV) next month. The fight will take place in Abu Dhabi. As for Whittaker, he has a title defense of his own lined up. He’ll unify his title with interim champ Israel Adesanya at UFC 243 in Australia.

Covington is expected to be the next challenger for Kamaru Usman’s welterweight title. If he’s able to get past “The Nigerian Nightmare,” perhaps Covington will go after a second division title, setting up possible fights against either Khabib or Whittaker.

What do you think about Covington calling for a fight with Khabib or Whittaker?