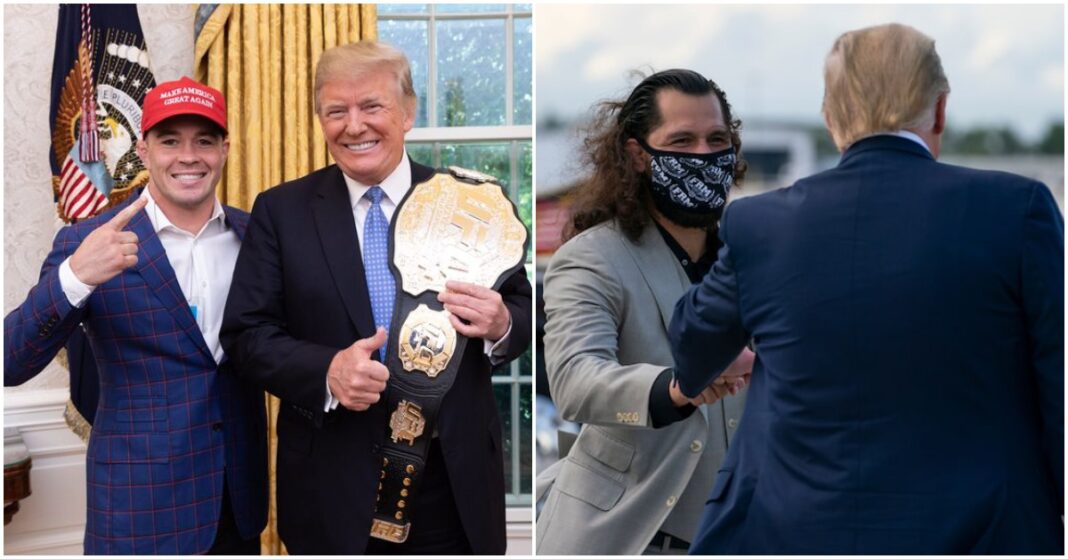 The former president of the United State, Donald Trump, will be torn when watching the UFC 272 on March 5.

In the main event of the evening, avid Trump supporters Colby Covington and Jorge Masvidal will settle their beef inside the UFC Octagon.

During a recent appearance on The MMA Hour, Masvidal suggested that Trump will be rooting for him to beat Covington at UFC 272, he said.

“I know that for a fact. (Donald Trump) knows what a fighter looks like. He was around boxing forever. He knows what a nut-hugger, ass-kissing machine like Colby looks like. Colby tried to kiss his hand and Trump pulled that sh*t back! That’s on video man, it’s me all day.”

‘Chaos’ responded to Masvidal’s recent remarks during an appearance at the  UFC 270 live weigh-ins.

“My reaction is that I’m team captain. I’m still, you know, Jorge’s Daddy and he’s just following in the footsteps of his Daddy,” Covington said at the 1:48:00 mark of the below video. “He just likes me so much that he wants to do everything that I do.

“Let’s be honest, did Jorge even vote for Donald Trump? Because I know I did. I’d love for the voters out there to go look it up and see if Jorge actually voted for Trump. You know I don’t if they let felons vote for Trump. You know, it’s good we’ve got a felon on the Republican side because there is so many felons and criminals on the liberal side. So let’s be honest. Did he actually vote for Trump? Someone look that up.” (Transcribed by BJPENN.com)

Covington and Masvidal are coming off losses to the UFC welterweight champion Kamaru Usman. ‘Chaos’ recently dropped to a decision defeat against Usman. Masvidal was KO’d by ‘The Nigerian Nightmare’ last time out after previously going five rounds with the champ on a weeks’ notice.

Who do you think Donald Trump will be rooting for at UFC 272? Colby Covington or Jorge Masvidal?