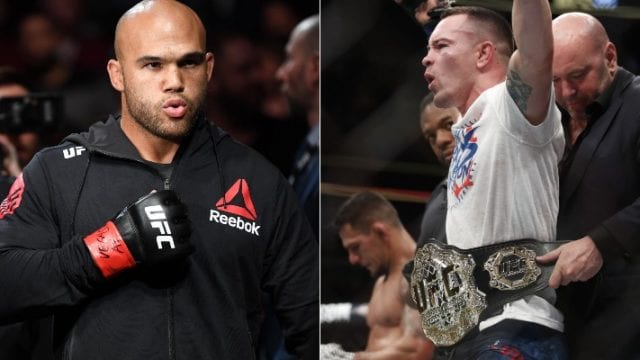 Covington joined “The Ariel Helwani MMA Show” earlier today (Mon. July 8, 2019) and was asked about his matchup against his former teammate. “”Chaos” didn’t waste any time to begin shredding “Ruthless,” who apparently departed American Top Team over a picture that was featured in the gym of Tyron Woodley holding his hands up after defeating Lawler for the 170-pound title:

“Yeah, pretty much “Snoozeman Marty Fake Newsman” is out there and he doesn’t want to fight,” Covington said. “So it only makes sense that I give a title shot to the most deserving guy in the division. A guy that’s coming off a first-round knockout of Ben Askren, “Ruthless” Robbie Lawler. The biggest name in the division.

“A picture they put up of Tyron Woodley getting his hand raised of when he beat Robbie Lawler. That’s why he left the team. It was put up in the gym. He got up in his feelings, started crying, and turned his back on all the people who helped him from the start.”

Because of the way things ended between Lawler and the gym, Covington, the self-proclaimed captain of American Top Team, believes it’s his responsibility to make an example of “Ruthless”:

Prior to Lawler leaving ATT, Covington and the former welterweight king shared a training room for several years. In fact, Covington was a primary sparring partner for Lawler when he fought Johny Hendricks – another southpaw wrestler – both times during his title run:

“Yeah, absolutely, many times,” Covington said. “When he was getting ready for Johny Hendricks he needed a southpaw wrestler, and that’s exactly what I am. So for both his Johny Hendricks fights I gave him hundreds of rounds of sparring.”

However, Covington was reluctant to give away any details as to how those sparring sessions went:

“Come on, Ariel,” Covington said with a smile. “You know I don’t kiss and tell.”

As August 3 closes in, Covington is dead set on getting one back for ATT, similar to the way he did against Demian Maia, who had defeated Jorge Masvidal 2017. Covington vowed to leave Lawler in a pool of his own blood:

“Absolutely, man,” Covington said. “I will make him pay for it. He’ll be in a pool of his own blood. Just like when I had to defend my boy Jorge when he lost to Demian Maia, I had to go out there and get one back for the team and leave him in a pool of blood.

“It’s gonna be the same way for Robbie Lawler come August 3. He betrayed me, man. I gave him everything. Trained with him every single day, it was always on his time schedule, he had all the coaches, all the money he could ever need in the whole entire world from Dan Lambert and American Top Team, and he betrayed us because of a picture, man.”

Covington will be facing Lawler in the main event of UFC Newark from the Prudential Center in Newark, New Jersey on August 3.

What to you make of Covington’s comments towards Lawler ahead of their fight?