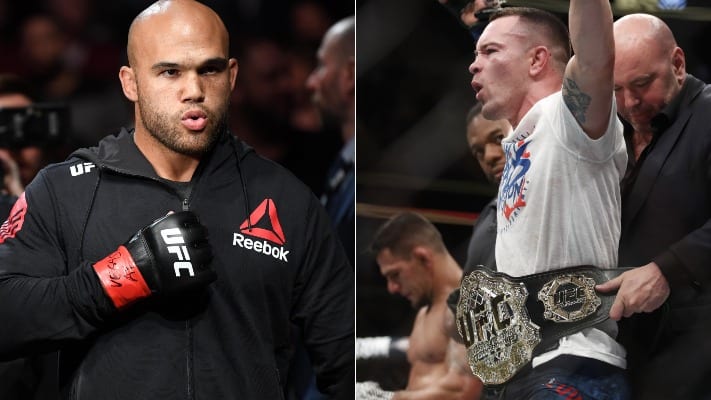 The UFC’s return to Newark will be getting a huge welterweight main event.

According to a report from ESPN’s Brett Okamoto, former interim champion Colby Covington will face ex-welterweight champion Robbie Lawler in the August 3 headliner. The bout is still being finalized, but verbal agreements are in place. Initially, Covington was expected to be next in line for a title shot against new 170-pound champ Kamaru Usman.

However, that no longer seems to be the case. “Chaos” last competed when he captured the interim welterweight championship by defeating Rafael dos Anjos in June of last year. However, he was later stripped of the title due to inactivity. Speaking to Ariel Helwani, Covington offered the following statement on the Lawler matchup:

“UFC needed a main event on short notice, so I agreed to defend my title in my first defense against the last real champion this division has had,” Covington said.

As for Lawler, he hasn’t fought since his controversial submission loss to Ben Askren at UFC 235 in March. Prior to that, Lawler missed the second half of 2018 with a torn ACL. “””Ruthless” has lost three of his last four fights inside the Octagon; those losses coming against dos Anjos, Askren, and Tyron Woodley.

Also on tap for UFC Newark is a great veteran clash between Jim Miller and Clay Guida.