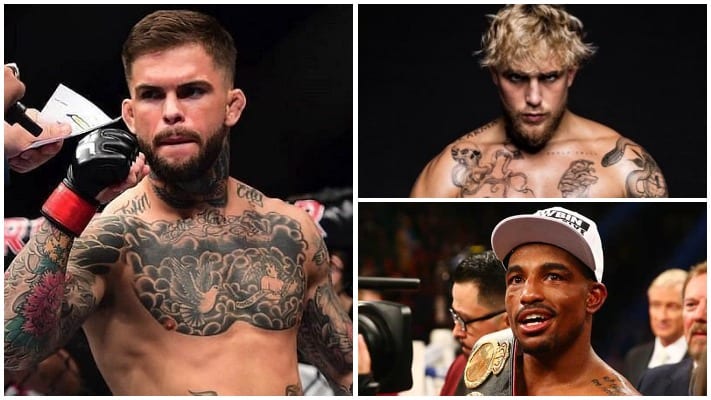 Cody Garbrandt is not here for athletes from other combat sports dissing MMA fighters. This week, he took to Twitter to give boxers Jake Paul and J’Leon Love a piece of his mind.

Jake Paul has not bitten his tongue at all on what he thinks of MMA and MMA fighters following his TKO of former UFC fighter, Ben Askren. The boxer has called out Justin Poirier and Nate Diaz. But his comments regarding Daniel Cormier were a step too far for Garbrandt. It started with a heated exchange between Tyron Woodley and J’Leon Love right before the Paul-Askren fight. Cormier commented on the disrespect shown to former champ Woodley, and the war of words began.

For his part, Cody Garbrandt has had enough and wasted no time jumping into the Twitter beef.

He also took time to respond to Love’s assertion that MMA fighters are weak.

Clearly, Paul and Love’s comments struck a nerve with the former bantamweight champ. In other posts, Garbrandt has invited both Paul and Love to step into the octagon. A move that neither boxer seems to be interested in at this time. Instead, both continue to stress that boxing is the sport that has large paydays, not MMA. It will be interesting to see how far the beef goes, as Garbrandt currently prepares for his upcoming matchup with Rob Font in May.

Do you think that Cody Garbrandt will face off with Jake Paul or J’Leon Love in the ring?