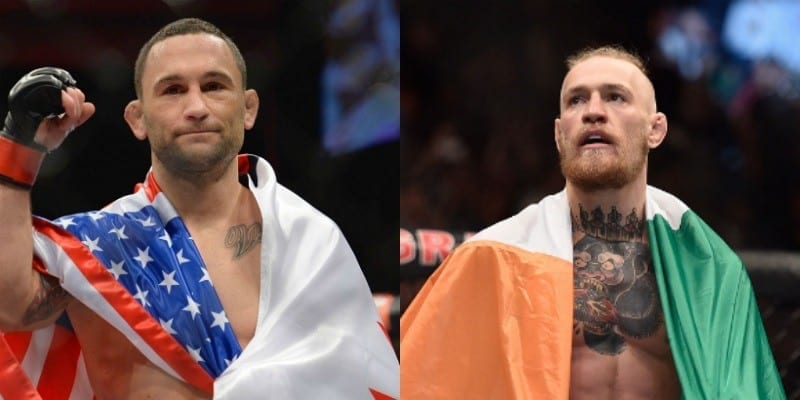 Former UFC lightweight champion Frankie “The Answer” Edgar will finally receive another shot at a featherweight title in the co-main event of July 9’s UFC 200 from Las Vegas, Nevada.

However, it won’t be the undisputed title that he and his team has been gunning for, as reigning champion Conor McGregor has put the division on hold with his quest for success at heavier weight classes.

Instead, Edgar will rematch ex-champion Jose Aldo for the interim 145-pound strap.

Edgar’s boxing coach Mark Henry recently spoke on the situation, comparing McGregor to his young daughter, and insinuating that the Irishman needs to let go of his title:

“Everybody keeps stoking up Conor so much, but Frankie is also trying to go for his second belt, too, and this guy- the thing with my daughter growing up, she was a great kid, but she wanted the baba and the binkie and the blankie (and) she was scared,” Henry told MMAjunkie Radio. “She just wouldn’t get rid of it and held on tight to that. And I think Conor needs to let go of that baba and the binkie and just let go of the 145-pound title.”

McGregor is indeed coming off of a disappointing loss to Nate Diaz at last March’s UFC 196 in a welterweight bout, but he’s also currently riding a seven-fight win streak at featherweight which was capped off by a stunning 13-second knockout over Aldo last December.

While his rise to fame was monumental to say the least, he was also heavily criticized on his way to capturing a world title.

Many felt as if McGregor, a powerful knockout artist, was handed opponents that fit right into his style, having seemingly avoided the division’s best wrestlers on his emphatic rise.

Henry agrees with this theory:

“Fraud. That’s been his path. Frankie’s gone a different path.”

If Edgar can get past Aldo in July, McGregor may have no choice but to finally clash with “The Answer”.

How would you see that fight playing out?