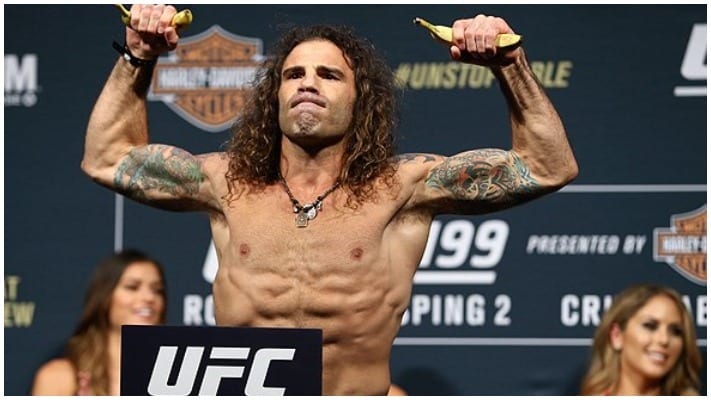 Lightweight veteran Clay Guida is hoping to rematch long-time rival Nate Diaz. The pair first fought back in January 2009 at UFC 94. Guida emerged victorious in an all-time classic fight, he picked up a split decision win via the judges’ scorecards after a back-and-forth fight. Guida was the first man to beat Diaz inside the octagon and he’s confident of doing it again.

Speaking during the UFC on ESPN 11 virtual media day Guida revealed he’d love to run it back with Nate Diaz and told the Stockton, California native to stop being scared and answer the call, he said.

“Some fights I’d love to have in the future, I’ve said it before and I’ll say it again and I’ll never back down from this one. Nate Diaz has got it coming to him someday. I beat his ass once, I’ll beat his ass again. If he ever toes the line and they stop protecting him, you know my number, Nate. So, don’t be scared, homie. You know where we are at buddy.” (Transcribed by BJPENN.com)

‘The Carpenter’ faces off against Bobby Green at UFC Vegas 3 this Saturday night (June 20). Guida is a significant underdog heading into the fight. Last time out he was quickly submitted by fellow veteran Jim Miller. Prior to that, he beat faded legend BJ Penn over three rounds.

Diaz hasn’t fought since losing against Jorge Masvidal at UFC 244. The inaugural BMF title was on the line and it was ‘Gamebred’ who emerged victorious after the ringside doctor waved off the fight between rounds three and four.

Despite their rivalry, it seems unlikely Diaz will be willing to take a fight with Guida. With all due respect, he currently has much bigger fish to fry. Potential rematches with Conor McGregor and Masvidal are still very much in play and will likely generate much more money than a fight with Guida ever could.

Would you like to see Clay Guida and Nate Diaz rematch?