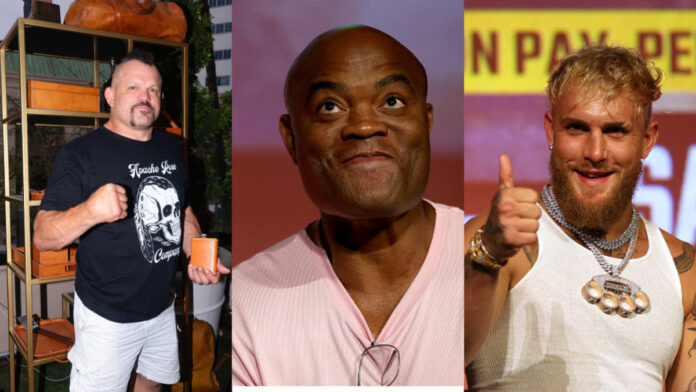 The infamous ‘Iceman’ Chuck Liddell has weighed in on the upcoming Anderson Silva vs. Jake Paul fight, choosing a side on what stands to be a truly interesting enigma.

Anderson Silva and Jake Paul have agreed to a boxing match at a catchweight of 187lbs, and it’s going down on October 29th. Despite the age gap, people are conflicted about who the victor will be. Some point to the decades of deadly MMA experience the legend Silva possesses as being his trump card, while others say the age difference will aid Paul.

Regardless, Anderson Silva has still been active in the fight world, with several victorious boxing matches in the last few years since his UFC departure. Meanwhile, Jake Paul has also attempted to stay busy. Yet, as of lately, he’s been plagued by cancellations galore. In the midst of struggling to put together a fight, it seems like his team and he is making a true gamble, facing one of the greatest to ever call themselves a mixed martial artist.

READ MORE:  How Competitive is MMA in Australia?

It’s a roll of the dice, but one that could have mixed implications. A win against Silva could potentially be undermined by the age gap. However, a loss to him could prove even more embarrassing as suddenly the narrative could change and Paul could be ridiculed for getting bested by an “old man”.

Chuck Liddell gives his prediction on the Jake Paul vs. Anderson Silva fight

“Jake (Paul) had some good luck with guys that were wrestlers that tried to strike…” Liddell continued. “One thing is to have OK striking for MMA, but that’s because you have to worry about them taking you down. When you don’t have to worry about getting taken down, then it’s hard to land those big bombs. But Anderson, he’s a striker and has been concentrating on boxing. He looked great in his last couple of fights.”

“I think he (Anderson Silva) wins, I think he knocks him out,” Liddell added. “But hey, man, I’m interested to see it. Good luck to Jake. The kid is fighting. He goes out there and really fights. You have to respect that.”

Who do you have winning the Anderson Silva vs. Jake Paul fight?