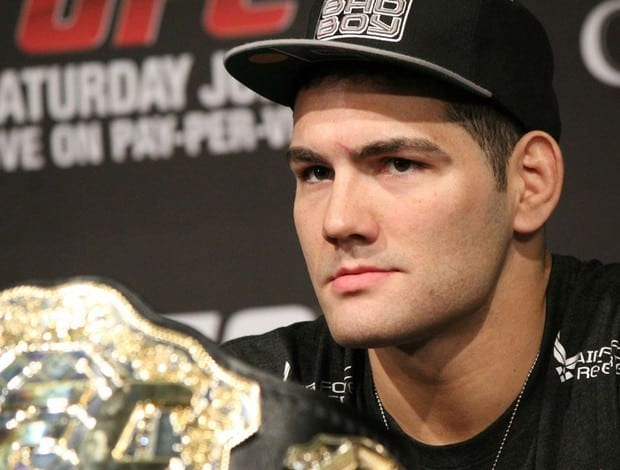 UFC middleweight champion Chris Weidman has suffered an injury in training, and will be unable to compete at UFC 184 next month. This according to multiple sources that confirmed the news first with MMAJunkie. “”The All-American” was scheduled to square off with legend of the sport Vitor Belfort in Los Angeles, California this coming February 28th.

This isn’t the first time that Chris Weidman injured himself in training. If you remember back to 2014, Weidman suffered a duo of injuries forcing him out of UFC 173 against Lyoto Machida, and also from UFC 181 against Vitor Belfort. Now, the middleweight boss is once again forced to back out of a title defense.

In case you were thinking this may just be rumour, check out a snippet from our friends at MMAJunkie:

“MMAjunkie has learned from several sources close to the promotion that Weidman has suffered an injury in training and has been forced to withdraw from the contest. The sources all spoke on the condition of anonymity because none of them were authorized to publicly discuss the matter”

No word yet from “The Phenom”, but it’s likely he’ll be very fired up and pissed off over this news. With the champion managing to make just one defense over the past 14 months, and now Chris Weidman injured himself again, is it too early to be talking about an interim middleweight title?

We’ll keep you updated as more on the story comes out, but ponder this; does Weidman’s backing out of UFC 184 make a rematch between Anderson Silva and Vitor Belfort a possibility? As far as UFC 184 goes, Ronda Rousey and Cat Zingano will now headline the card. And just as the UFC was hoping to make extra bank on the PPV front….

It has been confirmed by multiple sources that UFC doctors would not allow Weidman to compete because of an injury to his rib, although he still wanted to fight Belfort in LA. His return date is said to be around April or May, when he’ll have been out of action for nearly 18 months.