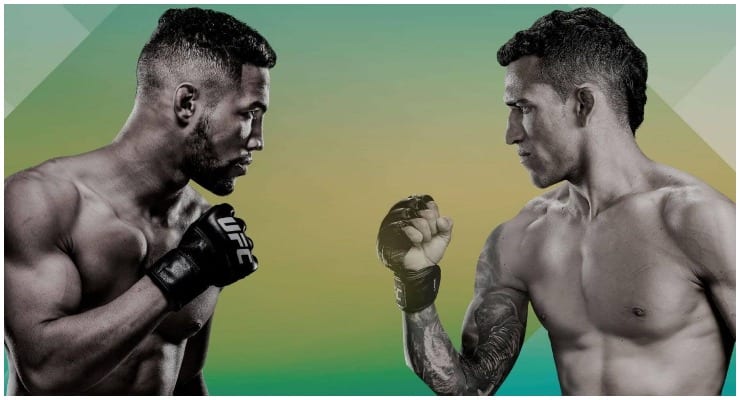 ITS TIME! The UFC Brasilia main event is upon us. Kevin Lee and Charles Oliveira are about to thrown down in a catchweight (158.5lb) fight. Originally scheduled at lightweight the bout was thrown in disarray yesterday as Lee missed weight by 2.5lbs. Will it have any bearing on the fight? We’re about to find out…

Round 1: The fight starts quickly Charles Oliveira opens with some unorthodox jumping switch kicks. The Brazilian is pumping the jab well but gets caught by a powerful right hand from Kevin Lee. Oliveira shoots for the takedown and gets it before attacking the leg of Lee. After some scrambling Lee temporarily ends up in half guard before Oliveira again attacks the leg – he’s not letting up but it doesn’t really look close, hes just hanging on right now. Lee gets back to full guard, before Oliveira throws up a triangle choke forcing the scramble. After defending submission attempts for the majority of the round Lee eventually stand ups and unloads some ground and pound to end the first period.

Round 2: Lee starts the round well with a big right hand. Oliveira doesn’t let it bother him and continues to press forward. The Brazilian is throwing big shots including some beautiful uppercuts – he looks to be controlling the fight now. Lee shoots for a takedown after eating more big shots and immediately has to defend a tight arm bar. The American gets to half guard and is looking to control the fight without doing much else. As the clock winds down Lee postures up and throws elbows. Oliveira once again goes for the leg attack but is eating shots as the rounds closes out .

Round 3: Oliveira comes out confident but is taking shots. Lee shoots in for a takedown and the BJJ specialist grabs the neck and has the guillotine choke in deep. Lee clearly taps but protests the stoppage immediately after doing so. Weird ending. Huge win for Oliveira.