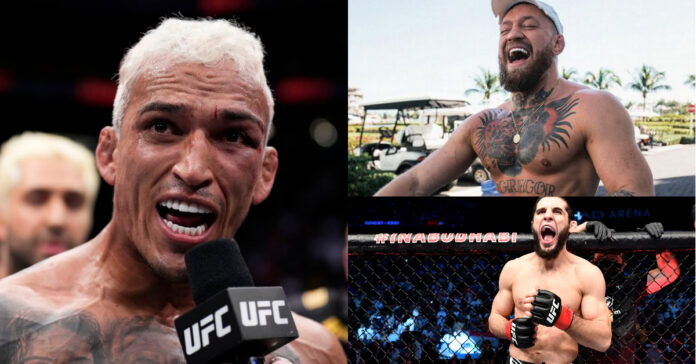 Charles Oliveira has admitted that he would’ve preferred a matchup against Conor McGregor over Islam Makhachev.

The uncrowned king of lightweights, Oliveira is coming off an impressive first-round finish of Justin Gaethje at UFC 274. After becoming the first champion to lose his belt on the scales, Oliveira was determined to get it back the next chance he could. A victory over Gaethje earned him the top contender spot while the title lay vacant.

There were talks of McGregor potentially getting a title shot in his return to competition. The Irishman has been in recovery since breaking his leg in his last outing against Dustin Poirier at UFC 264 in July the last year. Oliveira had expressed his interest in the idea of securing a big payday opposite “Notorious” in the past.

While the promotion waits on getting a timeline from McGregor for his comeback, it announced a title fight between Oliveira and Makhachev as the main event for UFC 280.

In a recent interview, Charles Oliveira doubled down on his stance of welcoming McGregor back to competition. He explained he did not really want the fight but had to take it.

“I didn’t want this fight. Everyone knows it,” Oliveira said (ht MMA with Subtitles). “I wanted the big payment from the other fight. However, everyone knows that I’m a UFC employee. You can’t escape that. So we tried to negotiate from every angle.

“I tried NY because it was a neutral ground. But the fight was decided there [Abu Dhabi]. But to be honest the cage is the same anywhere in the world.”