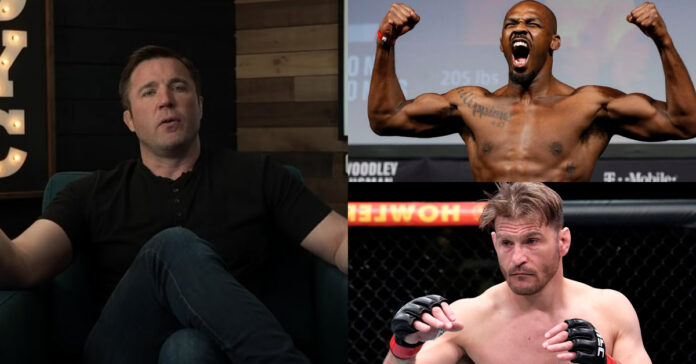 Chael Sonnen has cautioned Jon Jones about the power of Stipe Miocic, who reportedly bulked up in the time off.

Jones has been out of action since his last outing against Dominick Reyes at UFC 247 in Feb. 2020. Following a razor-thin win over Reyes, the former light heavyweight king relinquished his title and announced his decision to move up to the heavyweight division.

Former heavyweight champion Miocic emerged as the frontrunner to welcome Jones to the weight class after a potential showdown with the reigning division title holder Francis Ngannou fell through.

In an appearance on Henry Cejudo Breakdown, the former WEC champion and UFC title challenger Sonnen shared his analysis of a possible clash between Jones and Miocic.

“Jon’s going to do a lot of damage to Stipe on their feet,” Sonnen said (ht BJPenn.com). “He’s just dynamic, he’s going to kick his legs, he’s good with the range. Then there’s this whole experiment about can Jon Jones deal with somebody bigger than him that has the power to knock him out?”

Sonnen believes Jones needs to be cautious of Miocic’s power

The Bad Guy’ was not a fan of the opponent for Jones’ debut. After talks of an interim title fight between Miocic and Jones started doing rounds online, Sonnen argued against the idea, reasoning that a fight with a smaller adversary would miss the whole point of Jones’ move up. However, Chris Weidman reported that Miocic packed on the pounds while away from the octagon and is walking around 250 pounds.

Sonnen believes that Jones would need to be careful in the striking exchanges with Miocic.