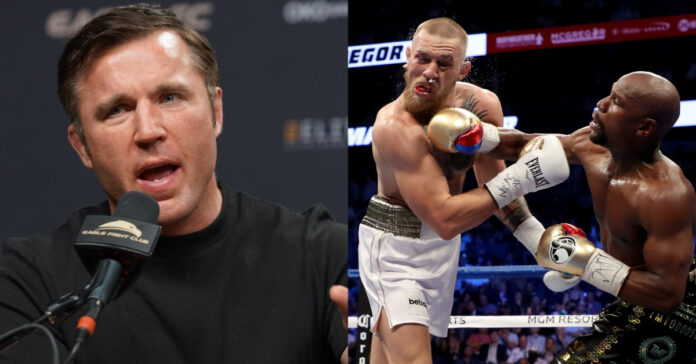 It was a collision of combat sports goliaths back in 2017 when it was announced that Conor McGregor and Floyd Mayweather would square off under the Queensberry rules.

The pair would embark on a world tour, exchanging barbs from Los Angeles to London promoting what would turn out to be the second biggest boxing event ever, selling 4,300,00 pay-per-views.

The bout itself went as the bookmakers predicted, Mayweather survived McGregor’s early onslaught and began to take control as the fight went on. Ultimately, ‘Money’ Mayweather would halt the Irishman in the tenth round.

Although many observers concluded that Mayweather was the clear victor, UFC legend Chael Sonnen believes that it was in fact McGregor who beat up Mayweather. When discussing the upcoming Nate Diaz vs. Khamzat Chimaev, Sonnen would make the comparison to the McGregor Vs. Mayweather bout.

“Diaz was an 8-1 underdog. Now 11-to-1 is what Conor McGregor vs. Floyd Mayweather was. It closed to 8.5, but Conor was an 11-to-1 dog, went out, and beat up a guy for 30 minutes. [Mayweather] lost four of nine completed rounds. He got his a** kicked regardless of what the crooks in the Nevada State Athletic Commission told you that night.”