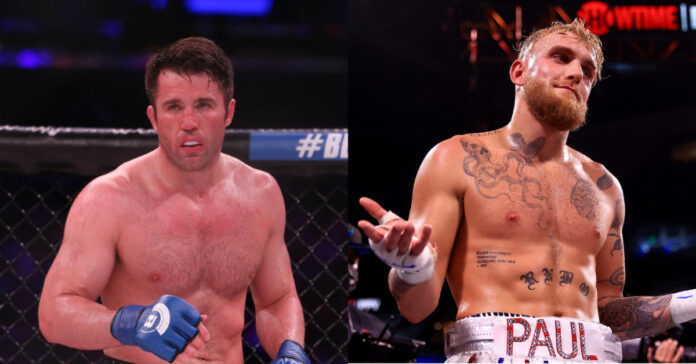 Former UFC fighter, Chael Sonnen has ripped into the boxing community over the matter of Jake Paul, labeling them scared and stating that “the community does not want to accept that an outsider.”

Mere days ago, social media star, Jake Paul announced that he had canceled his August 6 fight against Hasim Rahman Jr. due to Rahman’s weight issues.

Rahman himself was a late replacement, stepping in for Brit Tommy Fury, who was denied a visa due to The United States.

Rahman had signed the fight to be contested at 200lbs, but when the New York State Athletic Commission (NYASC) completed a weight check, he weighed 215lbs. NYSAC ruled that due to the weight being so high close out to the fight, they would not commission the bout unless it was contested at 205lbs.

Paul would agree to the five-pound weight jump, but Rahman’s team informed that they planned on pulling out of the fight unless it was bumped even further, all the way up to 215lbs, forcing the fight to be canceled.

Although Paul has many detractors, one man who has always been on his side is former UFC title challenger, Chael Sonnen.

Sonnen, who has always been one fan of the self-promotion side of combat sports, would defend Paul, slamming the boxing community in the process.

“I begged him, Jake” Sonnen began. “Don’t do the Tommy fury thing. Not only does Tommy not want that fight, neither does the community of boxing, they’re setting ya up. They’re setting you up because they, the community, are just as scared as the boys in the locker room that you’re as good as you’re saying you are.”

“The community does not want to accept that an outsider, who did not start this as a second generation the day he came out of the womb, can be a main event and a box office draw. They don’t want to, they’re going to talk you into Tommy Fury and the second you say yes, they’re going to start tearing you down, so that your loss looks magnificent, and your victory looks small.”

What do you think of Chael Sonnen’s comments?