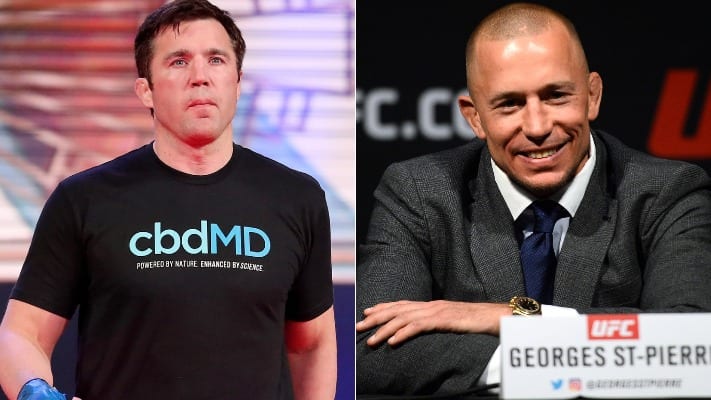 However, one man who has had the rare opportunity to have either fought against or trained with all of those men is Chael Sonnen. Speaking on his podcast, “You’re Welcome,” recently, “The Bad Guy” offered his thoughts on the GOAT debate. For Sonnen, there’s only one answer. Georges St-Pierre.

“The greatest pound-for-pound fighter of all time – I do not think it’s too much of a discussion – is Georges St-Pierre. Georges St-Pierre has a few things on his side, aside from success and an overwhelming talent. Georges St-Pierre was the first and only guy to do three things. He beat all of the guys of the previous generation.

“He beat all the guys of his generation, and then before he left he beat Johny Henricks who representing the carrying of the torch for the following generation. He beat three generations of guys. Then, when you’re talking pound-for-pound – all pound-for-pound means, from the guy who coined the phrase in 1965 in Brooklyn, New York, all that is to mean is who can go any weight class with his skills and win any weight class.

“Whoever can do that is the pound-for-pound best. When Georges St-Pierre came back and changed weight classes and captured a world championship at yet another weight class – I believe that was the nail in the coffin of the argument. I would have made the argument, all the same. I’ve fought Fedor, Jon Jones, Anderson Silva, I’ve trained with Georges St. Pierre. I will tell you who the best fighter of those four is, it is Georges St-Pierre. I will tell you that for sure.“

It’s hard to argue with St-Pierre as the GOAT. The Canadian has defeated the likes of BJ Penn, Matt Hughes, Matt Serra, Nick Diaz, Johny Hendricks, Thiago Alves, Carlos Condit, and so many more. He is also one of only a few fighters in history to have captured two titles in different weight classes – middleweight and welterweight.

What do you think about Sonnen calling St-Pierre the GOAT? Do you agree?