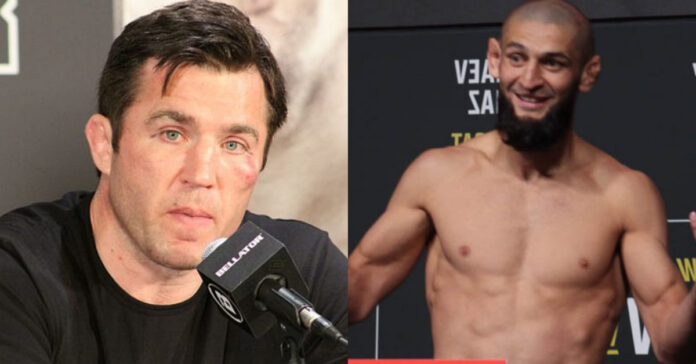 Chael Sonnen came to the defense of Khamzat Chimaev for his reaction to missing weight.

This past Saturday, Chimaev faced longtime rival Kevin Holland at UFC 279. “Borz” was scheduled to headline the card against Nate Diaz but needed to get his opponents shuffled after he came in overweight at 178.5 pounds, a huge seven and a half pounds over the agreed welterweight limit.

Following the weight miss, Chimaev did not seem to care as he gave the middle fingers to the cameras. He faced heat from the community for his reaction and quickly turned into an antagonistic figure.

MMA veteran Chael Sonnen argued against the hate Chimaev received as he gave his breakdown of the matter.

“I’m seeing people that were irritated with Chimaev,” Sonnen said (ht MMA News). “What is it that we’re upset about? That he missed weight? No, that’s not what it is,” Sonnen said. “What had you is that he missed weight and didn’t care. You saw no form of an apology… to the fans for changing the fight, to the promotion for losing a main event, to Nate Diaz… to Kevin Holland… There’s a lot of apologies you could throw around.

“The Bad Guy” theorized that there was not much of a choice to be made and that Chimaev took the road he found best.

“What is it that you wanted him to do? You think you wanted him to apologize… but would you respect him? … Do you want to be liked? Most people will answer yes, but if you ask me that question, liked or respected, I’ll take respected, for sure,” Sonnen added. “So what is it you wanted Chimaev to do? Grovel? Say sorry? Pull himself from the card completely? You want him to do something in the middle?”

Sonnen believes it was better for Chimaev to be hated than to concede and lose some respect.

“(If) he says sorry, (he) weakens himself… Come on, show us who you are. If you’re not sorry, don’t say you’re sorry, and he wasn’t,” Sonnen stated. “I really don’t think that if you look at this objectively, and you had the position of being an advisor to Chimaev… (assessing) what is going to serve him and his brand and his future the best, I don’t think you would be wise to come to him and tell him to begin to grovel.

“You’ve got to play the hand that you’re dealt. Should Chimaev have made weight? Of course Chimaev should have made weight. But if he doesn’t, does he need to be a baby?” Sonnen concluded.