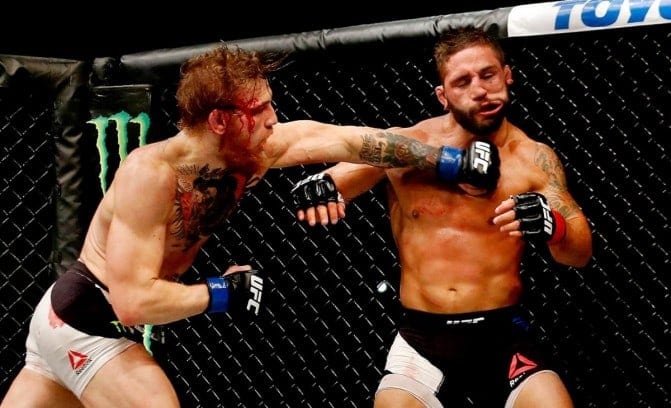 Team Alpha Male wrestler and three time UFC title challenger Chad Mendes has another big fight on the horizon, this time in the form of ex-lightweight champion Frankie Edgar. The two will collide at the Ultimate Fighter 22 finals on December 11, as part of a blockbuster three day run for the UFC.

‘Money’ suffered a crushing TKO loss at the hands of Conor McGregor at UFC 189, missing out on the interim strap that ‘The Notorious’ snapped up with the win, and he is still pretty fired up about some of the Irishman’s comments after the fight. Having taken the bout on just two weeks notice following Jose Aldo’s injury, Mendes’ cardio simply seemed absent. Talking with our good friends Submission Radio, the two time NCAA champion says that only ‘nut-hangers’ of Conor’s would believe he has bad conditioning:

“The only people that are questioning my conditioning are Conor McGregor nut-hangers, and that’s just because he said that. And dude, look at my fight with Aldo. I fought Aldo, who’s one of the best pound for pound fighters in the world. I went five rounds with him and pushed the pace the entire time. When I’m prepared, my cardio is never an issue. It never has been. There’s been one other fight with [Nik] Lentz, where I was sick and fought through it, and still beat that guy, who in my opinion would destroy Conor. So you’re always gonna get those people who are talking shit. And I don’t think my cardio is an issue. It never has been. I took that fight on short-notice, and that’s why it was an issue in that fight.”

“[If] I train a proper fight, I kill Conor. And I don’t think my conditioning is gonna be a problem in this fight.”

“You guys got to see what happened in the first two rounds. I mean, I took him down and was able to land shots at will. I mean, big elbows, big punches. The guy doesn’t have much off his back. And me in shape, I’m able to bounce around on the feet, stay light on my feet, take him down whenever I want. I feel like I could beat that guy just with the cardio alone with my wrestling.”

Then there was Frankie Edgar’s accusations that Mendes perhaps took a dive, or was looking for a way out against McGregor, comments that the Team Alpha Male stand outt= feels were completely uncalled for:

“Yeah, it’s frustrating reading comments and just hearing people say that I got paid off or that I took a dive. It’s like, come on, dude. This isn’t boxing. This isn’t boxing in the 80’s. This is MMA, this is how I make my money. This is what I live for. And there’s no amount of money in this world that’s going to be able to pay me off. Especially taking a dive against a guy like Conor McGregor (laughs). You know what I mean? There’s no way. It’s frustrating to hear people say that, but everyone has their own opinion. And these guys aren’t the ones that are getting in there, fighting in the octagon. So they’ll never ever understand or know what the hell we go through. I’m going to keep training, keep busting my butt. It’s always tough taking fights short-notice. There’s guys that have done it and succeeded and won, and there’s guys that get their butts kicked. Well, that’s all part of it as well. This is a very short-lived sport for us. I mean, we don’t get to do this for long periods of time throughout our life.”

“So it’s like, there’s huge risks for reward, and that’s just the chance that I was willing to take. It obviously didn’t go in my favour, but there’s nothing I can do about it now, other than control what I can, and that’s my training and my determination and drive forward, and that’s what I’m gonna keep doing with Frankie. He’s the type of guy that’s been in the sport for a long time, he’s a guy that’s fought and been the champion at 155, has come down to 145, and he’s going to learn what power, speed and athleticism feels like on December 11th. I’ll tell you that.”

Check out the fu8ll segment featuring Chad Mendes talking all about Edgar, McGregor and more, and stay tuned.