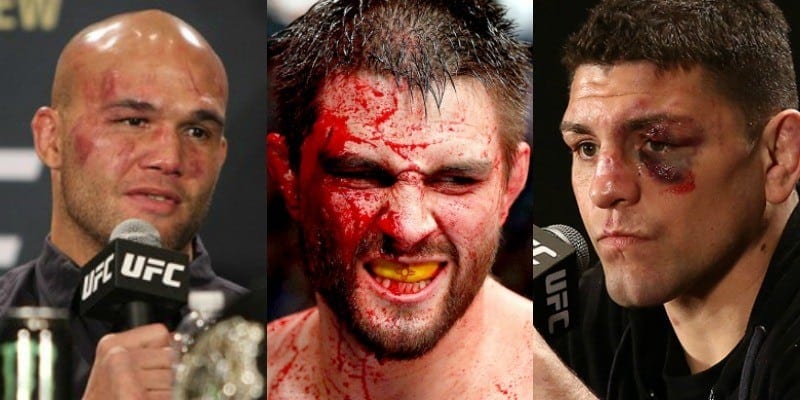 The fight was a fantastic back-and-forth five round war, although many had felt that Condit had done enough to get the job done, as did he and his team.

In the aftermath of the bout, the 32-year-old “Natural Born Killer” admitted that he was contemplating retirement, and he has yet to officially make up his mind on his fighting future.

Yesterday (June 15, 2016), however, Condit posted a video on his Instagram of him smashing the pads with the caption “One more”, leading many to believe that he was teasing a return. He then appeared on The Luke Thomas Show to explain that although fans may have looked too far into his post, he was indeed ‘leaning towards’ a return:

“It was actually, I had done a post right before I posted that one so it was like, ‘okay, one more post.’ So yeah, I guess you guys are looking deeper into that than was really there…As far as whether I’m gonna do another fight or not I feel like it’s up in the air. I’m leaning towards yes, possibly but it has to be something that really piques my attention.”

As far as what fights would pique his interest, obviously a rematch with Lawler is at the top of his list. Condit also admitted, however, that he’d be open to a rematch with Nick Diaz, whose suspension will be up later this summer.

Condit and Diaz squared off for the interim 170-pound strap a few years back in an exciting and close contest that “The Natural Born Killer” would apparently be willing to add a second chapter to:

Typically, fighters start to derail when their passion for the fight game is lost. That isn’t the case for Condit, however, as his passion and fire still remains. The reluctance to return is simply based off of his long term health:

“It’s not that I don’t want to keep going. I still love fighting. I still have a passion for it; I still have a lot of fire. The question is whether it’s the smartest thing for me to keep going. I’ve fought professionally – it’ll be 14 years now in the fall I guess and that’s a lot of wear and tear, that’s a lot of wars in the cage, in the ring, and in the gym. I’ve just got to start thinking about the future. I’m still undecided as far as what that entails but I’ve got to be smart for the long term.

“I think it’s common knowledge that getting punched in the head repeatedly for over a decade is probably not a good thing, probably not good for your health.”

In closing, Condit said that a return wouldn’t take place until likely next year if he indeed decides to strap up his gloves again. The former title-holder did claim, however, that he’d be ready to step in for either Lawler or Tyron Woodley if either man is forced out of their title bout next month:

“I don’t think it would be until next year. I’ve got some stuff going on between now, and the end of the year, that I probably won’t have time to be in a training camp. Early next year possibly, but I’m in shape. If Tyron Woodley or Robbie Lawler get hurt, I’m ready to jump in there and fight for the title again if need be. But as far as a scheduled fight it wouldn’t be until next year.”

Who would you like to see Condit face in his return to action?