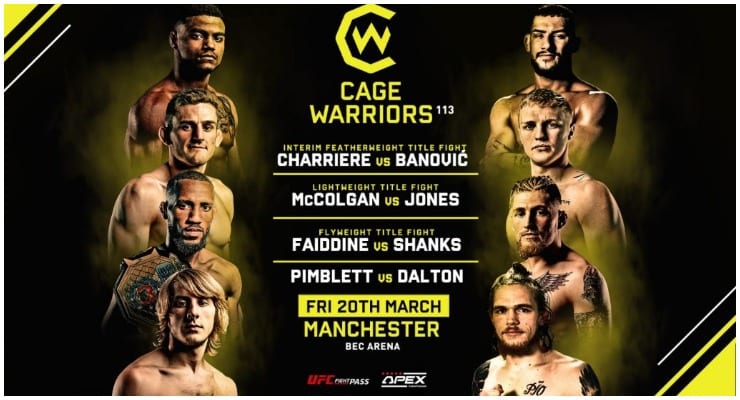 Cage Warriors have relocated their event on Friday to Manchester from London.

CW113 has become the last remaining MMA event scheduled to go ahead as the UFC has now officially postponed this weekend’s card and their upcoming fight nights in Columbus and Portland.

The London-based fight promotion temporarily called off their upcoming card earlier today. That was after AEG, who owns Indigo at the O2 in London, announced they would be canceling all events at their venues including CW113. Announcing the news on Twitter, Cage Warriors President, Graham Boylan said.

“In the past hour U have been told AEG will close all venues until further notice so @cagewarriors LONDON wont happen Friday.”

Less than an hour later, Boylan returned to the social media with some much more cheerful news. “I & team have spent the past 45 mins moving the entire event to Manchester. The event is ON, just relocated and still behind closed doors. #cw113 @CageWarriors”

Following on from the tweet Cage Warriors released an official statement confirming CW113 had been relocated and explained why they are so determined to press ahead with the event.

“The Cage Warriors team is working around-the-clock to get this done. After everything they’ve been through, the fighters deserve to compete. After all the support they’ve shown us, the fans deserve some calm amongst the chaos. We’re determined to provide the world with a seriously exciting night of MMA this Friday.”

Earlier today, the organization announced they would be housing some of the fights which had been scheduled to take place at UFC London. Both John Phillips vs. Dusko Tudorovic and Darren Stewart vs. Bartosz Fabinski will take place at CW113 in Manchester this Friday night.

They only bolster what promises to be an exciting night of fights. Three Cage Warriors championships will be on the line, while the promotions biggest star Paddy Pimblett makes his long-awaited and eagerly anticipated return to fighting.

Will you be watching Cage Warriors 113 this Friday night?