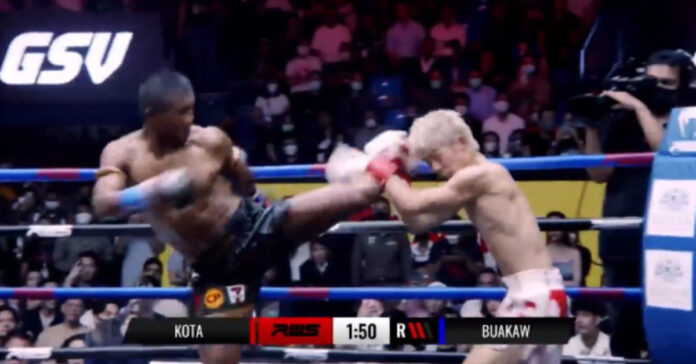 Muay Thai legend Buakaw Banchamek made his return to Rajadamnern Stadium in Thailand for the first time in 18 years and made quick work of up-and-coming Japanese mixed martial artist Kota Miura.

With more than 250 career wins to his credit, Buakaw Banchamek is one of Muay Thai‘s most well-known and respected practitioners. The former K-I World Max Champion recently signed with Bare Knuckle Fighting Championship and is scheduled to make his promotional debut at BKFC Thailand 3 on September on September 3rd.

Ahead of his highly-anticipated bare-knuckle debut, Buakaw competed against Miura, an internet heartthrob and aspiring mixed martial artist born to footballer Kazuyoshi Miura and model Risako Miura. The two squared off inside Thailand’s longest-running boxing stadium, which first opened in 1945.

In the bout, which you can see highlights below, Buakaw delivered a showstopping performance and put Miura away in the third round by technical knockout. It was another great showing for the Muay Thai icon just weeks away from his first foray into the world of bare-knuckle boxing.

“This is our third event in Thailand and I can’t wait to see the legendary ‘Buakaw’ in person and for our fans all over the world to watch him on the BKFC app. Thailand is a very robust, growing market for BKFC and we’re expecting a massive crowd on hand for ‘Buakaw’s’ bare-knuckle debut. Thanks very much to our partners in Thailand; Nick Chapman and Golf along with the Singha Corporation.”

In his promotional debut, Buakaw will take on Erkan Varol. A native of Turkey, Varol is a kickboxing specialist who holds a record of 88-33 with 46 of his victories coming via knockout.