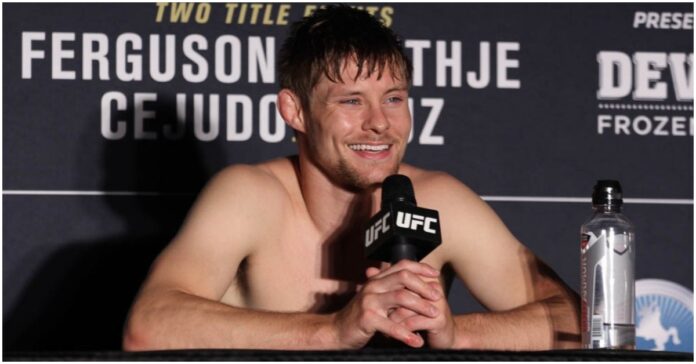 Bryce Mitchell was talking about mass school shootings ahead of his fight at UFC 272 with Edson Barboza.

Mitchell has become a must-see star in UFC since his twister submission victory back in 2020.

“Thug Nasty” is the eleventh ranked featherweight and is hoping a victory will take him into the top ten of the division.

Ahead of the fight, Mitchell went on The MMA Hour with Ariel Helwani, where he spoke about some sensitive topics:

“My number one explanation is that the government is in a lot of these. They have an agenda, they set up mass shootings and blame the AR-15s. They say ‘Oh, now we’re coming to take your AR-15s now’. Let me tell you why they haven’t taken away the AR-15s, cause this is God’s land, they cannot. They do not have the power to take away these AR-15s. They have been trying and trying and trying, the people are too strong. I would die before I hand these guns over to my government.” (Transcribed by BJPENN.com)

Anyone who knows about Bryce Mitchell won’t be exactly shocked by these comments.

The 27-year-old has previously stated that he believes COVID19 was created by the government to cause uproar and panic.

How does Bryce Mitchell match up against Edson Barboza

This fight is the typical grappler vs striker event as well as being number ten vs eleven in the featherweight division.

Barboza has had mixed results since dropping down to 145lbs, the veteran lost his debut at featherweight to Dan Ige.

Then went on a two-fight win streak by beating the likes of Makwan Amirkhani and Shane Burgos before that was snapped by Giga Chikadze.

Bryce Mitchell is currently undefeated in the UFC and is on a five-fight win streak, but he hasn’t fought since late 2020 so could ring rust be a factor?

Who do you think will win between Bryce Mitchell and Edson Barboza?