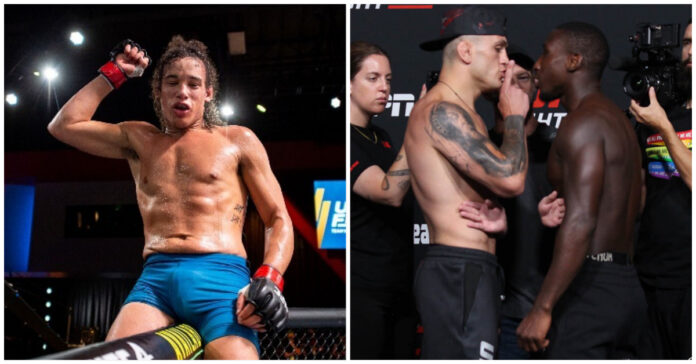 Bryan Battle has revealed his pick for the upcoming bout between Tresean Gore and Cody Brundage tonight.

Tresean Gore is set to take on Cody Brundage this Saturday at UFC Vegas 58 at the UFC Apex, Las Vegas, Nevada. Their bout will close out the preliminary card with both men coming in from a different direction.

Gore will be looking to get back to winning ways after dropping one in his most recent bout against Bryan Battle at UFC Fight Night 200 in February. It was a hard-fought contest with Gore getting the better of his adversary in the second round. The pair were initially scheduled to compete in the final of The Ultimate Fighter 29 but an injury kept “Mr. Vicious” out of the bout.

Meanwhile, Brundage has more momentum going into the fight off a win over Dalcha Lungiambula at UFC Fight Night 203 in March. He dropped one to Nick Diaz protege Nick Maximov in the prior contest and has gone 2-2 in his last four outings.

“Pooh Bear” cleared any remaining doubts after defeating Gore. The Ultimate Fighter winner proved that he earned the title by beating the man he was supposed to face on the show. Not only that, but Battle has also been in the cage opposite Brundage in an amateur MMA contest.

In an exclusive interview with LowKick MMA, Bryan Battle revealed his pick for the upcoming bout of Tresean Gore and Cody Brundage at UFC Vegas 58.

“My sons,” Battle said. “You talk about good matchmaking, that is excellent matchmaking because you’re going to get a lot of questions answered about both guys.

“Cody could grapple his ass off, I’ve been there. He definitely put me down and elbowed me in the face. The big thing is that Tre, his wrestling is a little undervalued I’d say which makes sense, he’s a knockout artist but his hips are so damn good. He’s so explosive so even if you get your hands locked around, he’ll be able to just kinda explode, and turn into you.”

Battle appears to be confident that Tresean will secure a knockout although he does have some questions that could swing the contest into Brundage’s favor.

“Honestly, I’m conflicted, I go back and forth but just off of my experiences I have a hard time not seeing Tresean getting the knockout. I definitely think he’s going to come back off of the fight with me and he’s going to have a different approach to the game and he’s not going to be as passive.

“Boxer wrestlers are kind of his best matchup, he matches up with boxer wrestlers better than someone like me who’s going to be gassing around and moving around. He’s going to come forward and definitely has a definitive advantage on the feet.”

Battle reveals the key factor in the fight

Having been in there with both athletes, Battle provided a first-hand breakdown of the matchup drawing from his personal experiences with the two.

“Once again, nothing against Cody,” Battle said. “Tre’s hands are a little bit different, I ain’t going to lie. I still beat him any day of the week but his hands are different. His wrestling is really good, his hips are really good. It’s going to be a simple game plan for Tre.

“He’s going to definitely try to pressure Cody to take a bad shot and if Cody takes a shot off the pressure and finishes it, that’s Cody all day. Cody’s going to maul him. But if Tre defends that first takedown, then I think it’s going to be a long night for Cody.”