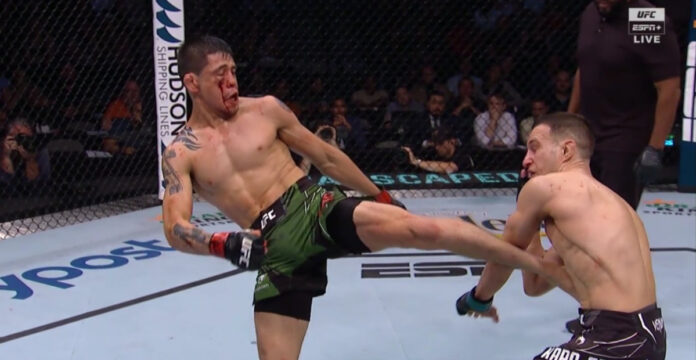 Brandon Moreno knocked out Kai Kara-France in round three of their bout at UFC 277 on Saturday, which began with a horrific liver kick that would drop the New Zealander, before finishing the fight with ground and pound.

Although UFC 277 was not the most hyped-up PPV event of 2022, the action it produced certainly rivals some of the other cards the promotion has put on this year.

Of the 13 fights, seven would end in a stoppage but even those that went the distance produced exciting moments, such as the welterweight matchup between Orion Cosce and Blood Diamond. Both men would land a spinning back fist at the same time, sending the pair wobbling across the octagon in opposite directions.

However, no moment was quite as brutal as Brandon Moreno’s KO over Kai Kara-France midway through the third round. As Kara-France backpedaled, Moreno would explode into a left body kick, immediately crumpling Kara France, leaving him grimacing while Moreno began to unload on him.

The sound of the impact was that of a whip being cracked, sharp yet undoubtedly powerful, take a listen below:

What’s next for Brandon Moreno?

Now being the interim flyweight champion, this now sets up Moreno to take on rival and current flyweight champion Deiveson Figueiredo. The pair have faced off three times already with both taking home a win and the first fight would end in a dramatic draw.

Their trilogy has produced some of the most exciting title fight action one could hope for, back and forth wars, dramatic finishes, and razor-thin decisions.

Figueiredo has stated that he would like the fight to take place in Brazil, an idea that UFC President Dana White seems to be on board with.