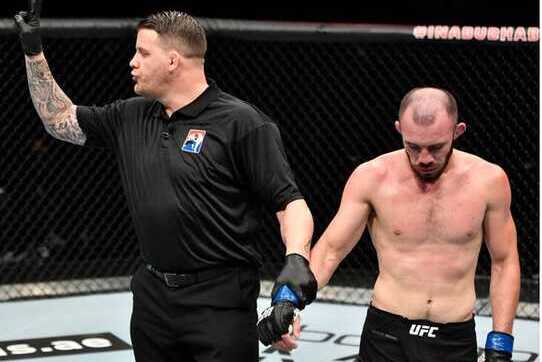 Former M-1 Challenge Lightweight Champion Roman Bogatov has reportedly been released from the UFC, as confirmed earlier today by MMAJunkie.com. The former undefeated (10-0) Russian fighter landed repeated fouls on Leonardo Santos throughout the bout at UFC 251, perhaps the reason he was cut. Most don’t lose their UFC debut and get cut, especially former world champions.

Bogatov fouled Santos once in round one, about two minutes in with an eye poke, and then three fouls in round three after an incredibly tough round two. Round two saw Santos almost finish Bogatov with numerous strikes once he was already hurt, and it could have justifiably been stopped, but Bogatov was able to stay composed enough to continue.

Round three saw Bogatov knee Santos in the groin twice, as well as land a brutal knee to Santos’ face while he was downed. This forced Marc Goddard to step in and take two points from him. He ultimately lost the fight via unanimous decision (29-26, 29-26, 29-26). It’s good the points taken away didn’t effect the decision to say the least, that’s always unfortunate.

Bogatov did handily win round three despite his three fouls and two points taken away. It’s unfortunate he’s been cut, M-1 Challenge has a lot of highly elite mixed martial artists, many of which belong in the UFC. Perhaps he’ll resume his career with them.

Where would you like to see Roman Bogatov go from here?