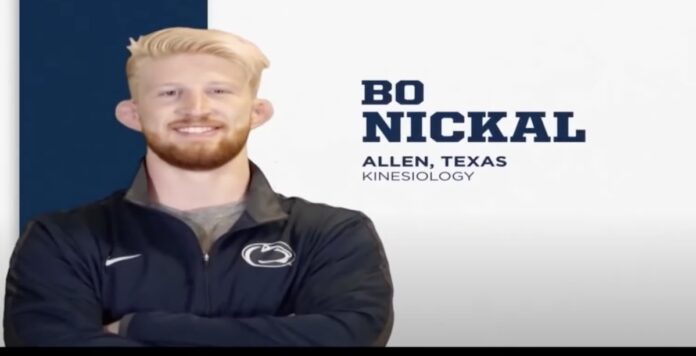 Bo Nickall is one of the most decorated wrestlers of his generation accomplishing nearly everything possible within the sport. Now he has his eyes set on dominating in BJJ and MMA.

Here is a rundown of Bo Nickal and his journey from wrestling champion to competing in the cage. We’ll detail Bo Nickal’s run winning multiple collegiate wrestling titles to his transition to BJJ and MMA.

Nickal lived in Wyoming for 6 years years until his family moved to Rio Rancho, New Mexico. During his time in New Mexico, Bo continued to improve his wrestling ability.

When he was in eight grade, he would make the high school wrestling team, which is unheard of. In that year, Nickal would place 2nd at the New Mexico state championship against wrestlers 5 years older than him.

After placing second at state, Nickal’s family would once again move to another state. This time to Allen, Texas, where Bo would start his freshman year.

During his freshman years, Bo would place second in the Texas state wrestling championship. Then from the time Nickal was a sophomore he would win the state title three years in a row.

Bo Nickal would end his high school wrestling career with a record of 183-7 with 131 pins. He was also ranked the 9th best wrestler in the country.

After Nickal graduated from high school, he would then commit to wrestle at Pennsylvania State University. Bo would choose to redshirt as a freshman, which means he delayed his freshman year to extend his eligibility.

During the 2014-2015 season, Bo Nickal would wrestle unattached to any university. He would compile a record of 15-2 in open tournaments and would still practice with the Penn State wrestling team.

After redshirting for the 2014-2015 wrestling season, Nickal would join Penn State as a freshman in the 2015-2016 season. He quickly made Penn State one of the top wrestling teams in the country.

Bo would compete at 174lbs and win his first 18 matches. After getting his win streak snapped, Nickal would win 8 matches in a row and win the Big 10 Conference Championship.

Also nearly winning the national title, but placing second after being upset by rival Myles Martin.

Bo Nickal came back better than ever for his sophomore year after coming up short his freshman year. This time, he would choose to cut less weight and move up to the 184lb division.

He would only lose one time this season during the Big 10 Championship and would end up placing 3rd. But he would bounce back at the national championship tournament.

In the championship finals, he met Gabe Dean, who was going for his 3rd straight national title. Nickal was able to upset Dean by a point to win his first national title.

Nicklal would return for his junior as the top ranked wrestler in the country. During the regular season, Bo Nickal went undefeated.

In the postseason, Nickal would win his second Big 10 title, beating his rival Myles Martin again. He would meet Martin again in the finals of the national tournament and was able to pin him. One of the best pins of his collegiate career and winning the rivalry with Martin to win his 2nd national title.

Bo came into his senior year looking to make history as one of the few wrestlers to win 3 national titles. This time, he would test himself by once again moving up a weight class to 197lbs.

By not cutting weight, Nickal moved incredibly well in his new weight class. To end his collegiate career, Nickal would win every major title and won the Danny Hodge award.

After finishing his collegiate wrestling career, Bo Nickal would take his shot on the world stage. He would win the US Open wrestling tournament, which gave him a chance to qualify for the US national wrestling team.

In the finals, he would face former world champion J’den Cox. Nickal would lose two straight matches to Cox and come up short of making the team.

But by winning the US Open, Nickal had the right to a wrestle off at the US U23 World Team Trials. He would face the winner of the challenge tournament, Jakob Woodley in a wrestle off for the final spot.

Nickal would beat Woodley and secure his spot on the US national team. In the U23 World Championship, Bo would have three matches.

He won his second match by beating returning world champion Shamil Zubairov. This would set him up in the finals against Batirbek Taskulov, who had previously beaten Nickal in 2013.

Bo Nickal would get revenge and win the world title by beating Taskulov 12-2.

Unfortunately in 2020, Nickal wasn’t able to compete much during that season due to Covid-19. That year’s Olympic Summer Games would be rescheduled for the next year in 2021.

Bo Nickal attempted to make the Olympic team and came into the team trials tournament as a 6th seed. He beat his former teammate and college national champion Carter Starocci in the opening round.

In the second round, Bo beat another US national champion in Pat Downey. Then in the third round, Nickal would beat Zahid Valencia to earn his spot in the finals.

He would face another teammate and former world champion in David Taylor. Nickal’s teammate would beat him to earn a spot on the Olympic team and would win a gold medal.

After winning the world wrestling title, Nickal announced that he had signed with First Round Management. A management agency for MMA fighters.

As Bo Nickal began his transition to MMA, he would be invited to join American Top Team. At ATT, Nickal would begin learning MMA and also become a wrestling coach for the MMA team.

Nickal has most notably worked with Dustin Poirier and Jorge Masvidal for their title fights.

In a surprise move, Bo Nicka would make his debut in professional Jiu Jitsu in 2019. Answering a challenge from ADCC and No-Gi World Champion Gordon Ryan.

Their match would take place in the main event of a Third Coast Grappling event. In the match, Nickal was very hesitant, but did well as he had never competed in a Jiu Jitsu competition before.

He defended nearly all of Ryan’s takedown attempts, but would eventually get submitted by Ryan later in the match. As of now, this has been the only Jiu Jitsu match that Nickal has participated in.

Since 2019, Bo Nickal has been transitioning to MMA and working to build his skills at American Top Team. So far, Nickal has competed in two amateur fights and is currently 2-0 with one TKO and one submission.

Although he is still at the amateur level in MMA, Bo is still being scouted by the top MMA promotions in the world. Both the UFC and Bellator have expressed interest in signing Nickal in the future when he turns pro.

What is next for Bo Nickal?

Bo Nickal has shown that he is a special competitor with a drive to win like no other. He dominated the world of wrestling and is now looking to make a splash in BJJ and MMA.

Don’t be surprised to see Bo Nickal’s name at the elite level of either sport in the future. He has shown that he can compete and win at the highest level of any sport he tries.

Nickal has expressed that his desire is to one day become a UFC champion. With Bo’s determination, you will likely see him in either the UFC or Bellator in the coming years.