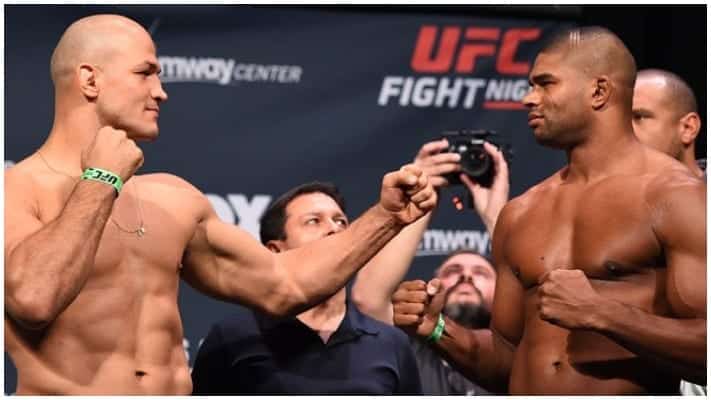 Both the ex-champ and the former title challenger were surprisingly cut from the UFC roster earlier in the week.

Overeem was cut just weeks after his devastating KO loss to Russian contender Alexander Volkov in February. Before that, Overeem was riding an impressive win streak over the likes of Walt Harris and Augusto Sakai. He has won 4 out of his last 6 fights, but at the age of 40, his days in the UFC were numbered.

The future hall-of-famer would go on to make a statement following the last call from the UFC.

Junior Dos Santos would also be caught in the same contract-ending carnage as “The Demolition Man.” The former Heavyweight kingpin was notified of his release just about the same time as his former foe. The 37 year-old on the other hand was left on a trail of losses. Dos Santos had dropped 4 straight, losing to top of the division including Francis Ngannou, Curtis Blaydes, Jairzinho Rozenstruik, and lastly Ciryl Gane.

Dos Santos fought a plethora of killers, going through murderer’s row to eventually capture the title of ‘Baddest Man on the Planet’ when he knocked out Cain Velasquez at the peak of his career. He would also go on to defeat current champ Stipe Miocic among the likes of Mark Hunt, Frank Mir and Derrick Lewis.

“Cigano” released the following on his social media:

The question on everybody’s minds is what’s next for these two warriors?

RIZIN CEO Nobuyuki Sakakibara expressed interest in signing Overeem to fight once again in Japan, like he did decades ago. However, only if the money is right. The dangerous duo of free agents caught the eye of another promoter in a totally different sport than MMA. Bare Knuckle Fighting Championship (BKFC).

BKFC boss David Feldman was intrigued by both Overeem & Dos Santos and sees great potential in a crossover from 4-ounce gloves to no gloves at all.

“Yes, we are interested in both Junior dos Santos and Alistair Overeem.” Feldman told BJ Penn. We have already made contact with them and their teams. Let’s see what happens.”

Is BKFC the right move for Overeem and Dos Santos?