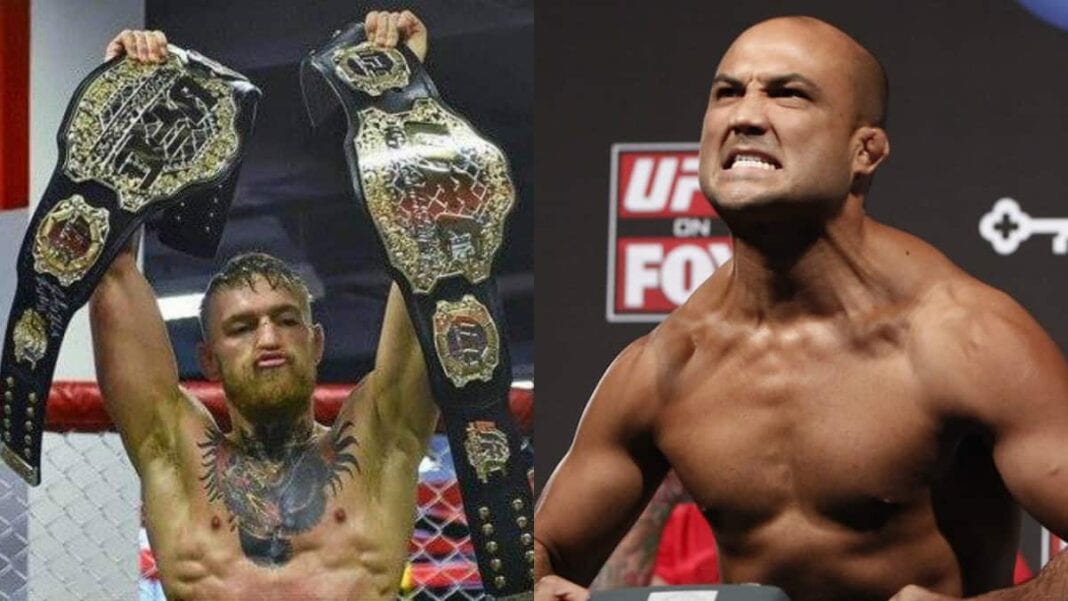 Last week legendary former UFC lightweight and former UFC welterweight champion BJ “The Prodigy” Penn took to his official twitter account, hinting at a potential return to action and indicating that he would be training with highly touted coach Greg Jackson.

Appearing on today’s (January 19, 2016) edition of the MMA Hour, the 37 year old confirmed his comeback, noting that he has his eyes on the featherweight title:

“I want to go get that 145-pound belt. That’s definitely a huge motivation for me. I believe with Greg Jackson’s help, I can get that done. And I believe that I will be able to walk away as the only man with three titles in three weight divisions.”

Although it would be incredibly difficult given the current state of his career, Penn would indeed make history if he were able to capture 145-pound gold.

Losing his last three bouts to date, the former two division world champion retired after coming out on the short end of a one sided beating against Frankie Edgar in 2014. Apparently not quite ready to call it quits just yet, “The Prodigy” knows this is his last chance, but with Jackson in his corner he seems confident in his future:

“I’ve been kind of thinking about it for a while. But, this is my last resort, and I’m going to give it everything I got,” Penn said.

“I made sure to tell Greg, I let him know the other day that if I can’t do this, Greg, in any way, shape, or form, you feel that B.J. doesn’t belong in the ring, please let me know. Please let me know. And he’s very confident that we can get something done. With somebody like that, who has so many champions himself and who has does as well as he has in this sport, when he tells me that: ‘I know you can go out and I know you can beat all these guys,’ it gives me a lot of confidence.”

Having not won a single bout since 2010, Penn wants to assure himself that he won’t return in the form he had been fighting in near the tail end of his run, but at the end of the day, he’s eager to challenge himself against the best fighters in the world:

“I don’t want to be a shell of my former self,” Penn said. “And I told Jackson that if I can’t do this, you let me know. You come straight to me, Greg. You see me sparring one day, you look at me and say ‘this guy don’t got it anymore,’ pull the plug right now. I got a wonderful life back in Hawaii. I love my life. But I love fighting more.

“I realize what I’m up against. I’ll go out right now and give all my respect to these guys. These guys are animals. These guys are the best athletes in the world, and I want to go and take my place among them.”

Although the cards seemed to be stacked against him, Penn is a special type of athlete, and Jackson is notorious for reviving the careers of those who have seemed to be passed by.

As for what the future holds, UFC President Dana White also confirmed the news, but has nothing planned as of now:

“(It’s) true,” White wrote via text message when contacted by MMAjunkie. “But I don’t know when or who he will fight.”

Who would you like to see “The Prodigy” return against?