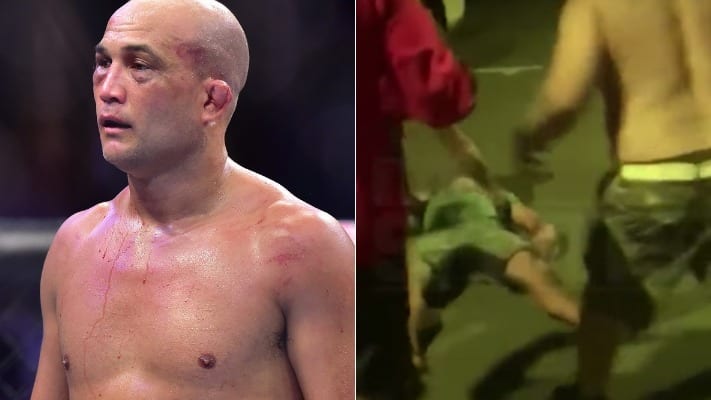 BJ Penn made headlines late last month when video emerged of yet another street fight he was involved in.

Penn was initially shown pounding on the civilian on the ground. However, later that day, new footage emerged showing Penn get knocked out cold during the fight after eating a punch. The footage drew a ton of criticism from the mixed martial arts (MMA) world. Penn had remained silent on the matter, given he has a fight against Nik Lentz coming up soon.

Now, he has broken that silence while speaking to TSN’s Aaron Bronsteter. Penn explained his side of the story. The Hawaiian claims the man he fought was a friend of his, and things spiraled out of control over some sort of disagreement at a concert. Penn tried to calm the situation down initially and hug his friend, but after eating a few punches, which included him being knocked down, he was forced to defend himself.

“An acquaintance of mine, he gets mad about something. Something was said or if it was an old past thing, and then, he wants to fight about it and I’m like ‘nah, nah,’ I’ve got a lot of witnesses, everybody else can corroborate my story. I was like, ‘No, no, no, I don’t want to fight, we’re friends, everything’s cool,’ this and that.

“So he even walks outside and I’m thinking, like, ‘Oh, this is silly, I’m going to go get him, calm him down, come back inside, we’ll come enjoy the concert,’ we’ve got some other friends there. This and that, this and that. And then I walk outside to go to give the guy a hug. And then he hits me twice and I’m like, ‘No, no! Calm down!’ And I try to give him another hug and he hits me a couple more times. And then he hits me again. I mean, I wish they [TMZ] didn’t cut the video in half. So whoever put that video out cut it in half.

“I wish it had the whole thing that showed me trying to hug the guy. And then finally my adrenaline picked up because he was hitting me so much, I’m like, ‘Oh, go ahead, hit me again.’ I thought the guy would eventually say, ‘You know what? Forget it, BJ, whatever.’ Give me a hug or whatever, walk away, and then he hit me and he hit me good, knocked me down.

“And then when I got back up he tried it again and then I just have to defend myself already. So that’s what you see in the second video. But the last thing I’m trying to do is trying to look to get into a fight. I mean ask anybody who knows me. I’m not the first guy to go around and just start pushing people.

“I’m an older guy too, and I just want to enjoy my life and I’m thinking today driving around, why don’t I have two bodyguards on the sides of me at all times just making sure it’s impossible I can get into any trouble. I was thinking that all morning.“

What do you think about Penn’s explanation for the recent street fight?