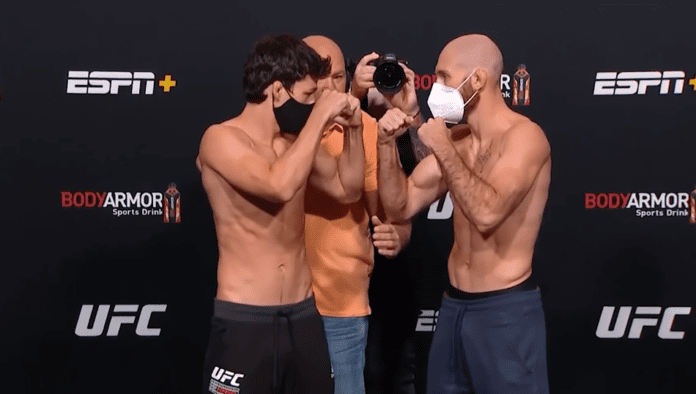 Opening the main card we have a Featherweight bout between Billy Quarantillo and Kyle Nelson.

Round 1: Nelson opens aggressive landing a nice right hook before a high kick. The two continue to exchange on the feet. Nelson bursts forward forcing Quarantillo to clinch on the fence. Nelson reverses position. The two break and move back to the center before Quarantillo lands a big right hand. Nelson attempts to throw a right hook and eats a knee up the center. The pair clinch again against the fence. Nelson lands a heavy right hand. The two break once again. A high kick is blocked by Nelson. Quarantillo bursts forward with a combination that is blocked. Nelson fights a home for his straight right hand. A low kick almost takes Nelson off his feet. Quarantillo shoots in and secures a takedown. Nelson gets back to his feet threatening a guillotine. A groin strike in the clinch puts a pause to the action. The pair touch gloves and get back to it on the feet, Both fighters land heavy shots. Nelson lands a spinning back kick right before the bell sounds.

Round 2: The round opens with the pair exchanging shots and low kicks. A jab finds home for Nelson, he continues to land including some heavy body kicks. Quarantillo shoots his shot but bails on it before securing the takedown. Nelson continues to land up top forcing Quarantillo to shoot for another takedown. Nelson defends with the two ending up against the cage. Quarantillo lands an elbow in the clinch. He continues to aggressively pursue the takedown eventually securing it. Nelson quickly returns to the feet and the two exchange elbows in the clinch. Quarantillo lands a heavy knee as well as an elbow. The elbows continue as the pair remain clinched. Nelson gets some separation, however, Quarantillo continues to be aggressive coming forward and landing heavy shots. After taking damage Nelson shoots a takedown that is stuffed and sees Quarantillo end the round on top inside Nelson’s guard.

Round 3: Quarantillo opens the round with a one two that puts nelson to sleep and secures him the finish.