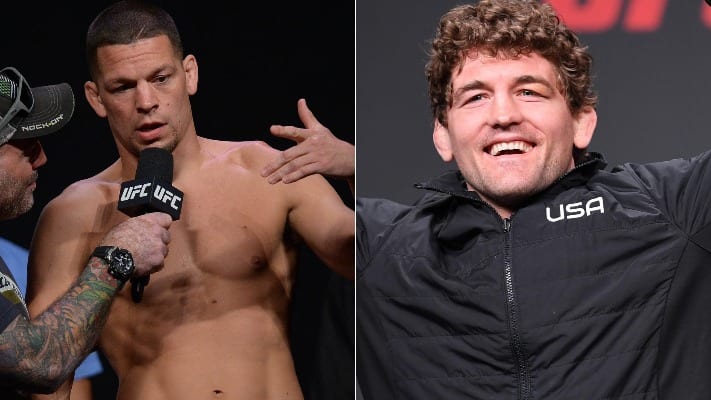 Jorge Masvidal and Nate Diaz will fight at UFC 244 for the Baddest Mother F*cker Championship. The two welterweights will collide in the main event of the Madison Square Garden pay-per-view (PPV).

UFC president Dana White has also suggested it’s possible the winner is next in line for the 170-pound title. Currently, Kamaru Usman vs. Colby Covington will headline UFC 245 in December for the welterweight crown, so it’s likely the winners of the two PPVs will be meeting in 2020.

Another man trying to climb his way back into the title hunt at welterweight is Ben Askren. “Funky” has a meeting with Demian Maia in Singapore coming up on October 26. Speaking to Submission Radio recently, Askren noted he has a hard time giving Diaz a title shot if victorious in November, simply because of his recent activity, or lack thereof.

“Oh, the BMF, that’s a one-off. They’re gonna do it one time and it’s whatever, it’s gone. You know, handed it one time, it’s kind of cool, now done and gone with. So, I think if Jorge wins, then he gets a title shot, and I would venture to guess that’s who’s gonna win.

“Although, I can’t be entirely certain, that’s where I would probably lean. And if Nate wins, I just have a hard time (giving him a title shot). Could you give him a title shot? Sure, right? But then again, he’s only beaten Anthony and Jorge, and that’s really it in the last, what, he took three years off or something? So that makes him challenging for the title fight. So, I think he could, but you probably would look to put him in a different fight of some kind. And then if Jorge wins, then I believe Jorge goes for a title.”

If Masvidal is victorious on the night, however, there’s no disputing he deserves a shot at the gold. He is currently on a two-fight win streak in which he has finished each of his opponents in devastating fashion. He knocked out Darren Till in the second round of their London meeting earlier this year. “Gamebred” followed that up with the fastest knockout in UFC history, finishing Askren in five seconds at UFC 239.

What do you think about Askren questioning giving Diaz a title shot with a win at UFC 244?