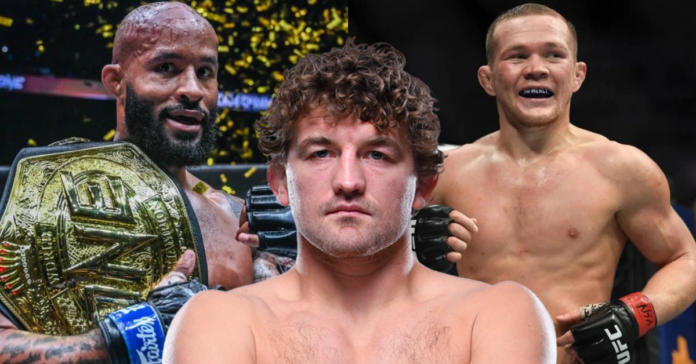 Former ONE and Bellator world champion Ben Askren has some ideas for the future of Demetrious Johnson. ‘Mighty Mouse’ was traded from the UFC to ONE Championship in 2018 in exchange for the collegiate wrestling great ‘Funky’ Askren. After winning twelve UFC title fights, Johnson earned a loss to Olympian Henry Cejudo, then, the UFC was happy to part ways the with the all-time great.

‘Funky’ Ben Askren believes that with the raised stock of ‘Mighty Mouse,’ the UFC may be interested in doing a trade again to get Johnson back. Recent reports indicate that Russian bantamweight Petr Yan may be currently unhappy with the organization and would like to leave the UFC.

Askren put it all together and said the UFC should look to get Demetrious Johnson back and send to ONE:

“Petr Yan. I don’t think he wants to be there anymore, they should find some good trade material for him. I think he wants to fight in ONE since he trains out of Thailand. I’m sure there’s somebody you can find in ONE, maybe they get Mighty Mouse back. That would be wild.” [Transcript courtesy of MMA News]

Petr Yan does train at Tiger Muay Thai in Bangkok, Thailand so competing in Singapore would be closer to home for the Russian fighter. Ben Askren discussed this idea in an exclusive interview with MMA News. See the full interview below:

Demetrious Johnson in ONE Championship

‘Mighty Mouse’ Demestrious Johnson may not be receptive to a trade though. The US-born athlete has found tremendous success while competing in ONE Championship and is happy with the management. While competing in ONE, Johnson has earned the ONE Flyweight World Grand Prix Championship and the divisional title ONE Flyweight World Champion earlier this year. Additionally, he was able to compete in a special rules super fight against Muay Thai phenom Rodtang Jitmuangnon.

Being able to compete in mixed rules bouts and a Grand Prix was a selling point for ‘Mighty Mouse’ to join ONE. After winning the flyweight throne via knockout earlier this year, Demetrious Johnson discussed ONE in a post-fight interview. He said:

“It feels good. As I said, I’m a platinum guy, right? And when I signed with this organization, when he announced like the World Grand Prix, and once I saw that World Grand Prix platinum belt, I was like, I got to have that f***ing belt. I was like, I need that belt … I’ve always wanted to win a World Grand Prix. That was one of the things I grew up watching Cro Cop, Josh Barnett, you know, who was in PRIDE’s Openweight Grand Prix. It was something I really, really wanted.”

From the sounds of things, Demetrious Johnson is happy where he is. He continued:

“I’m just grateful to be in a position I’m in. I’m grateful to have the opportunity to perform on a beautiful platform like ONE Championship and a great partnership with Amazon Prime.”