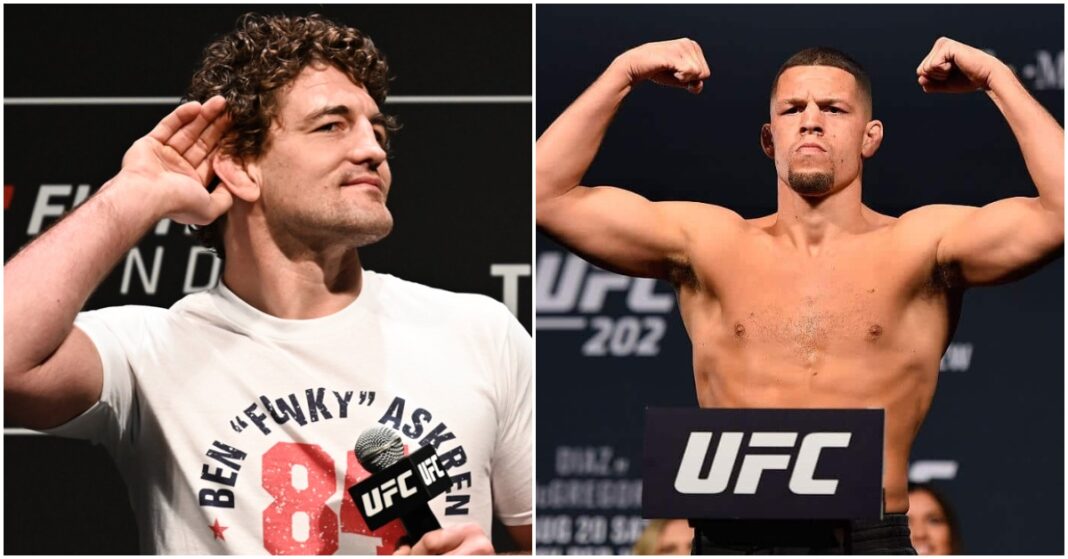 Having not fought in the UFC since 2019 it appears as though Ben Askren is ready to come out of retirement for the possibility of an ‘easy’ fight against Nate Diaz.

Askren entered the UFC regarded as one of the biggest stars outside of the company boasting impressive undefeated record collecting titles in multiple organizations. However, things didn’t work out the way he would have wanted and following a devastating KO from Jorge Masvidal and a submission loss to Demian Maia, Askren called it time on his career.

“I’m willing to put my money where my mouth is and be the last fight in your contract.”

“That’s it. At the end of day, I’m retired from fighting. I don’t ever want to train full time again, but man, I think every fighter, a little part of you loves fighting, like you love the battle.”

Ben Askren Only Interested In A Nate Diaz Fight

Diaz himself has been calling for a fight for weeks on social media now, and following back-and-forths with many fighters on social media, Askren wants to be one of the names in consideration and appears set on having Diaz as his opponent.

“So hey, if [the UFC] were going to give me an easy one [Nate Diaz], I’ll take an easy one. I’ve taken three losses in a row. I’m due for one,” Askren said. “I think that’s probably very unlikely to happen, so I’d probably just stay retired.” (Transcribed by MiddleEasy.com)

Given the names we have seen Diaz linked with it is very unlikely this is the fight the UFC would choose to go with given the options that are available. One man who has been mentioned on multiple occasions is Dustin Poirier. Speculation has surrounded this matchup for quite some time and with both fighters openly wanting to step inside the cage it only makes sense that the UFC gets this fight booked.

How do you think Ben Askren Vs Nate Diaz would play out?