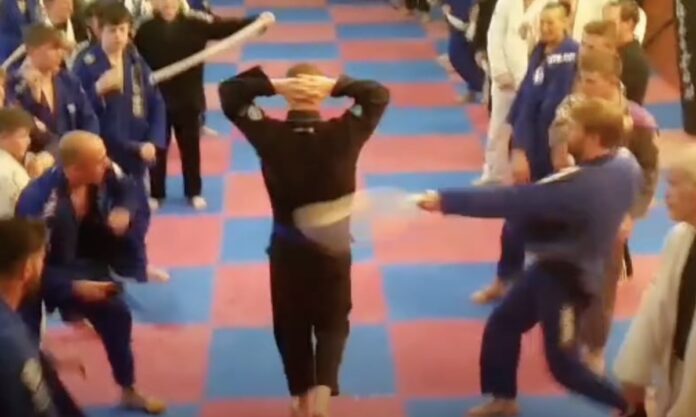 You may have seen belt whipping ceremonies on videos or unfortunately been on the receiving end of one. Belt whipping in BJJ, also known as ‘The Belt Gauntlet’ is an old tradition that is used by many old school Jiu Jitsu academies.

Not many know where the tradition comes from, but let’s see if we can learn more about belt whipping in BJJ. Going over how it started, when they are done and different opinions about the practice.

We’ll also detail other types of ceremonies that are practiced within BJJ.

What is belt whipping in BJJ called?

In English, the ceremony of belt whipping in BJJ is known as “the gauntlet.” The name they use for the belt gauntlet in Brazil is the “Corredor Polonês” which means Polish corridor or just corredor.

When is the belt whipping in BJJ done?

The belt whipping in BJJ or belt gauntlet as some called it is done only on two special occasions. Either whenever teammates get belt promotions or it’s a teammate’s birthday.

Who came up with belt whipping in BJJ?

Many assume that the ceremonial belt whipping in BJJ was first practiced in Brazil, but it actually wasn’t. Many old school BJJ black belts credit black belt Chris Haueter with coming up with the practice. One of the first 12 non Brazilian black belts in the world, who was an early student of the Machado brothers.

Haueter tells the story that he started doing this practice in the early 1990s at the Machado brothers’ school. Chris was running classes while the brothers were away filming a movie, when he got this idea.

He just got back from military training and felt that the gym needed a sort of hazing ritual to build comradery. Haueter admits that the idea was a bit dumb and did get out of hand after a while.

Nonetheless, the practice spread to other gyms and belt whipping in BJJ became a thing.

The rules for belt whipping in BJJ

From videos you’ve probably seen, the gauntlet looks chaotic free for all. But there are actually rules set in place, so nobody gets seriously hurt.

Critics against belt whipping in BJJ?

There are many critics of belt whipping in BJJ that see the act as violent, unnecessary, and kind of dumb. One of the biggest critics of this act is world champion Caio Terra who spoke out against belt whipping.

Other types of BJJ ceremonies

The gauntlet isn’t the only type of BJJ ceremony that schools practice within the martial art. There are quite a few different types of ceremonies that different gyms practice.

When someone is about to be promoted, there are some Jiu Jitsu gyms that put them into the shark tank. The type of training, where you’re put in the middle of the mat and have to roll everyone without a break. Once you complete the shark tank, you are awarded your belt.

Once you get promoted, some gyms will put you through the ringer, where everyone gets to do a takedown on you. Your teammates will all get in line and get to do one takedown or Judo throw on you without you resisting.

Promoted at the podium

Then of course, nearly every Jiu Jitsu school does the ceremonial promotion at the podium. Whenever a student competes at a big event, their instructor will surprise them with a belt promotion on the podium. Many of the best BJJ athletes in the world have been promoted to black belt on the podium.

Should belt whipping in BJJ be done away with?

Some grapplers believe that belt whipping has no place in BJJ and should be done away with. Many like Caio Terra don’t see the need for practicing this act within the martial art.

Is belt whipping in BJJ dumb, violent, and probably unnecessary? Probably, but the Jiu Jitsu schools that do belt whipping do it out of love and comradery between the students.

There is no malice behind the act and they aren’t trying to seriously hurt their teammate. Belt whipping of course isn’t a thing that is done at all BJJ gyms and only done at certain schools.

Not everyone is a fan of the practice, but it isn’t going anywhere and BJJ gyms will continue the practice.