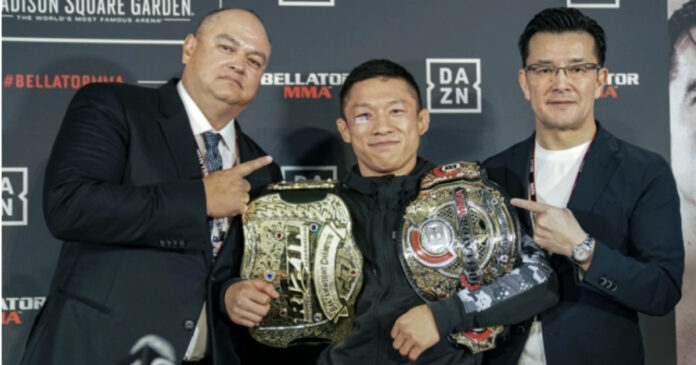 MMA promotions Bellator and RIZIN are set to team up once again to put on a New Year’s Eve show.

Today, the two promotions announced that they would be putting on a Bellator Vs. Rizin card on December 31st. Patricio ‘Pitbull’ Freire, A.J. Mckee, Kyoji Horiguchi and Juan Archuleta are all set to compete in the event, with more matchups and fighters being announced in a press conference on Wednesday.

This won’t be the first time the two promotions have teamed up, co-promoing Bellator 237 between Fedor Emelianenko and Quinton Jackson back in 2019. The event took place in Toyko, Japan and featured several Rizin fighters.

Bellator also sent their then-bantamweight champion, Darrion Caldwell, to fight Horiguchi back in 2018 on a Rizin New Year’s Eve show. Horiguchi would choke out Caldwell, earning a second fight, this time for in Bellator and for the title.

The 32-year-old would defeat Caldwell again meaning he would have to defend the Bellator title once a year while also being signed with Rizin. Horiguchi has consistently fought for both promotions since.

Bellator promoter, Scott Coker has been a vocal advocate for cross-promotion events, calling for a UFC Vs. Bellator card. Coker has also worked with Khabib Nurmagomedov and Eagle FC, agreeing to make Junior dos Santos vs Emelianenko should Santos win his next fight, which he did not.

Coker also allowed one of his biggest stars, Michael ‘Venom’ Page to compete in a bare-knuckle fight under the BKFC banner earlier this year.

Coker has teased an event like this for some time and had promised to work on more events with the Japanese promotion in the future.

The close relationship between the two organizations stems from Coker’s relationship with Rizin’s Nobuyuki Sakakibara, who have known each other since the early 00’s working in K1.

Are you looking forward to the event?