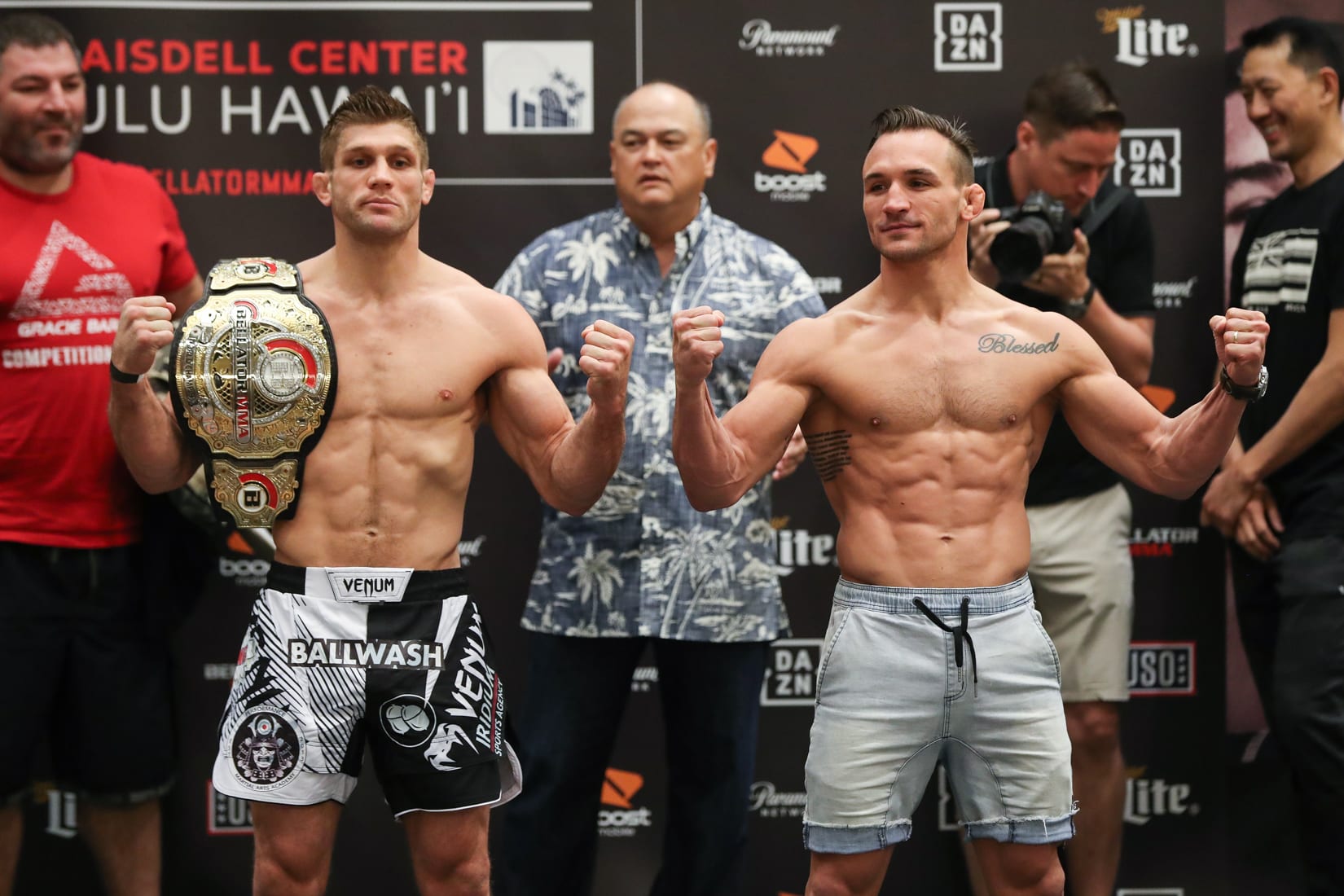 Bellator 212 results are underway as the Viacom promotion holds this latest event on television for fight fans around the world to watch the show.

It’s once again fight day here at LowKickMMA, and the talent on display tonight (Friday, December 14, 2018) will come in the form of Bellator 212. Headlining the card are Brent Primus and Michael Chandler, but there’s a whole bunch of great fights also taking place on the rest of the main card.

Brent Primus and Michael Chandler meet in a lightweight title fight in the main event. In round 1, Primus is targeting that left ankle of Chandler with a series of kicks. A big left hook drops Primus but he gets up and lands a right to the head. Chandler is in Primus’s guard. Primus is looking for openings for his submission game.  Chandler landed some big strikes. In round 2, Primus begins the second by tossing out kicks. Chandler is rocked by a punch to the face and he staggers into the cage before the fight went to the ground and Primus got his back where he worked for the rear-naked choke but Chandler got out of it it. Chandler reverses position and is now in Primus’s guard. Chandler lands some hard left elbows. In round 3, Chandler shoots in and scores a takedown against the cage. Chandler is mauling Primus on the ground and dominates this round. In round 4, Chandler ducks under a fight cross and scores an easy double-leg takedown. Although Chandler is controlling the pace and landing shots, he’s not doing much damage.  In round 5, Chandler slams a right to the body and then quickly takes Primus down. Chandler got the decision win in order to secure the lightweight title.

Frank Mir vs. Javy Ayala meet in a heavyweight bout the co-main event. In round 1, Mir ducks under a left hook and powers his way to a takedown. Mir is on top in half guard. Mir is looking for a Kimura from side control. Mir lands mount but Ayala explodes to his feet but Mir takes him down to end the round. In round 2, Mir is bleeding badly above his left eye. Ayala has Mir pinned into the cage.  Mir shoots in but Ayala sprawls and lands on top of the former heavyweight champ. Mir explodes to his feet. Ayala in his face, landing short elbows. Ayala wobbled but he fires back with a combo of punches that forces Mir to shoot in. Ayala is landing short lefts to the head in the clinch and Mir taps out due to the strikes.

A.J. McKee vs. Daniel Crawford is next in a featherweight bout. In round 1, McKee presses Crawford into the cage and scoops up Crawford and slams him down hard, landing in Crawford’s guard. McKee locks him up in an anaconda choke and that’s a wrap.

Alejandra Lara vs. Juliana Velasquez in a women’s flyweight bout. In round 1, they fight at a measured pace early, looking for spots to strike. Lara is backing away, looking to counter while Velasquez slowly stalks her. Velasquez shoots in and ties Lara up to end the round. In round 2, Velasquez shoots in and takes her down. Lara is able to scramble back to her feet. Lara tried a takedown, but she fails.  She falls back and tries to pull guard. Velasquez lands some decent shots while on the ground. In round 3, Lara is now backing away as Velasquez slowly stalks her with scattered punches. Velasquez drags her down and is on top. Lara is looking for a heel hook but couldn’t get it. Lara gets back to her feet late in the round where they strike it out. The judges gave the win to Velasquez.

Opening the main card on Paramount Network is Derek Campos vs. Sam Sicilia in a featherweight bout. In round 1, Sicilia stunned him right out of the gate then continued to tag him as they threw bombs. They clinched and Campos landed some good shots in the pocket. Sicilia lands a few more stinging punches upstairs but Campos rolls with them. In round 2, they come right out and swing for the fences. Sicilia is aggressive and forcing Campos back. Sicilia lands a few bombs to the head and Campos staggers back again. Campos gets the fight to the canvas and is in Sicilia’s guard. In round 3, Sicilia looks tired early and is taken down quickly into the third. Campos lands some heavy punches down the stretch and has Sicilia in trouble but time expires. In the end, the judges gave the win to Sicilia decision.

Featherweight: A.J. McKee def. Daniel Crawford via submission (Anaconda choke) at 3:19 of round 1