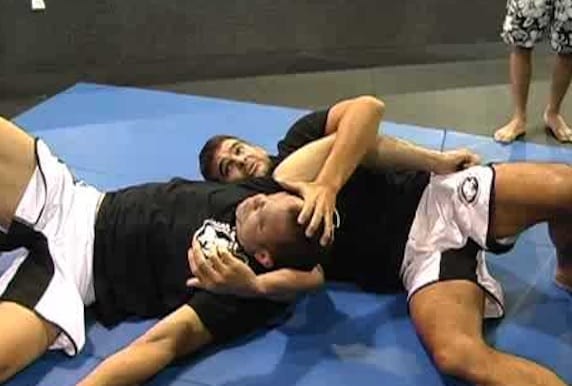 Getting front headlock control on your opponent opens a lot of possibilities to get different types of chokes. Guillotine chokes, darce chokes, and the one we’re here to talk about anaconda chokes.

The anaconda choke is an extremely tight choke that every grappler must know to have a complete game. Since being introduced into BJJ it has proven to be one of the most effective front headlock chokes. Along with the darce and guillotine.

Below is everything you need to know about the anaconda choke. Everything from how it was invented, how it chokes the opponent, various techniques, and tips.

When was the anaconda choke invented?

The anaconda choke was invented in the late 90s, early 2000s by a Brazilian fighter named Milton Vieira. Milton is a luta livre practitioner and BJJ black belt is UFC veteran that has been fighting for 2 decades.

He is also known for being a respected trainer and among them is the Nogueira brothers. Antônio Rodrigo Nogueira actually won two fights in Pride FC using his instructor’s move.

Vieira did an interview with us in 2012 and spoke to us about coming up with anaconda choke.

“Before I started using the position, I had never had any experience with it.  I started working with the position a little more than 13 years ago in training.  Since that time, I have put a lot of energy into the position.  Now I feel very good with it because I know many different ways to apply the position from different situations.  It is a submission I believe in a lot.”

Since Vieira invented the submission it has become a must know technique in Jiu Jitsu. Grapplers are still coming up with new entries into the anaconda, which proves how effective Vieira’s technique is.

How does the anaconda choke work

Just like with the darce choke, the anaconda choke works like a reverse arm triangle choke. Your forearm and the opponent’s own arm to cut off blood flow to their brain.

The move was dubbed the anaconda choke, because it works in the same way an anaconda strangles its prey. Once you lock it in, you take a deep breath squeeze with your whole body. Their only options are to submit or go to sleep.

The basic setup for an anaconda choke comes from when the opponent is on all fours in turtle. You can get them here by either defending their takedown attempt by sprawling on them or dragging them down.

You’re going to want to keep your chest on top of them to keep them from moving as you set up your grips.

With your hands, one is going to be around the opponent’s neck and the other wraps around their arm. This initial grip is to just hold them in place as you set up your choke grip.

The choke arm under their neck shoots under their arm until you can see your hand. If you need to make adjustments to get your hand through, there’s a number of options.

You can grab your choke arm and pull it until it passes the opponent’s arm. The other option is push their arm in with your grip arm to make it easier to pass your arm through. It also makes the anaconda choke tighter.

Use a reverse RNC grip grabbing your bicep and have your forearm under their neck for the tightest choke. It looks similar to a darce, but your grips are reversed.

To get them in position to finish them you can either turn them on their side or use a roll. The roll is more forceful and how the choke got its name.

Once you get them on their side, there’s only a few steps to finish them. With your chest on top of their head, walk yourself into them, and slowly squeeze with your body. Just like an anaconda.

To go along with the basic anaconda choke, there’s a tight finishing option you can also do. Sometimes, when you get an opponent on their side, they defend by putting their hands on your hips. This makes space for them to defend your choke.

To counter this, once you get them on their side you can hook their leg with your legs. Essentially putting them in half guard to take away the space as you lock in the anaconda.

If you’re going against someone with good defense, they’ll defend the roll by basing their foot out. The counter for this is really easy.

When they base their foot out just slightly lift them up and turn them the other direction. If they defend that way go back to the traditional anaconda roll.

An anaconda choke from a cradle in top side control is a great option to try. Start with your cradle with one arm around the opponent’s head and the other between their legs. You’re going to lock your hands together with an S grip to keep them in place.

With the cradle, you just keep them in position and eventually they’ll give you your anaconda setup. Once their top arm crosses if that is the signal to set up your anaconda.

Drop your hips toward the opponent’s head as you shoot your choke hand under their arm. Lock your grips and walk yourself into the opponent to lock in the pressure.

There is another variation of the anaconda choke you can do that is a little different than the traditional finish. In the traditional way you roll to get the finish, but you’re not doing that with this variation.

There is only one step different that you’re going to do to get the finish. Instead of rolling them, you’re going to bring your foot up next to the opponent’s knee and turn the opposite way.

Blocking the opponent’s leg with your foot cuts off their balance as you turn them on their side. It enables them from defending like they could when you do the traditional anaconda roll.

This variation offers a little different set up to get your opponent in position for the choke. With the opponent in turtle position, you’re going to take gable grip with a little twist.

Your grip hand is going to be palm up and you’re going to bring your elbow inward to turn them. As you turn them, put your head next to their side doing the roll through.

After the roll, you’re right in position to get your choke grips for the finish.

Tips for doing the anaconda choke

The anaconda choke is a powerful submission that will do wonders for your game. Learning this along with a guillotine and darce will make you a triple threat if you get head control.

Although there are specific details you need to do in order to lock on the anaconda properly. Here are some tips for doing the anaconda choke to give you more success hitting this submission.