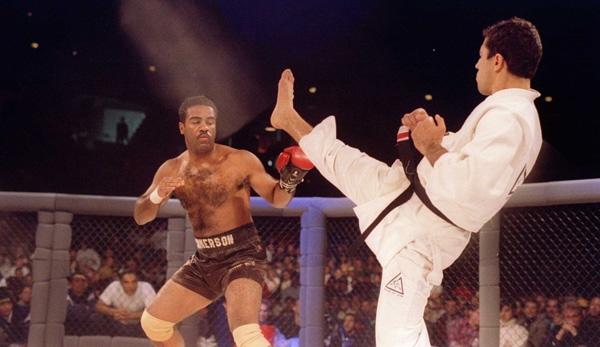 Art Jimmerson shared he was genuinely concerned for Royce Gracie’s health prior to their fight at UFC 1. In a new podcast documentary on Gracie by MMA TRUFAN, Jimmerson explained why he was worried about what might happen against the UFC Hall of Famer.

Jimmerson’s first impression of Royce upon seeing him did little to quell his concerns.

“The first thing I thought about with Royce was childish. He looked like a child. He did. I mean, he was so young in the face.”

One of the reasons Jimmerson didn’t take Royce seriously at first was because he couldn’t find information on him at the time.

“It was just funny. It was like a joke because back then there was no Google. There was no Internet. There was no Yahoo. So, basically I couldn’t really like look up who Royce Gracie was or what he (was) involved with.”

“He wouldn’t look at me at first. I’m a boxer. I’ve been in fights all my life. I’ve been in hundreds of fights. So, I know when I look in a guy’s eyes I can see their heart. Royce didn’t really look at me when we were getting ready to fight. He kind of shied away from me. Not saying he was scared of me. It’s just I like to look a guy in the eyes to see the guy’s soul.”

However, Jimmerson said all of that changed when they met again for the actual fight.

“On the night of the fight he just like turned into a tiger. He had to win. His dad was there. His family was there. So, when he came out he was going to do whatever he had to do to win.”

This fight is probably most remembered for the visual of Jimmerson wearing one boxing glove against Royce. Jimmerson

“It was more to protect him (and) also of course my hand. I had a big fight coming up. So, I wanted to make sure I didn’t break my hand on this guy’s face because (I was) having this fight for a lot of money in the near future. So, this was like easy money. I was like, ‘Man, this is the easiest time I’ll have in the world.’”

The “big fight” Jimmerson referred to was actually a fight against boxing legend Tommy Hearns. Jimmerson had worked as Hearns’ sparring partner in the past and was scheduled to fight him shortly after UFC 1.

Jimmerson shared that Royce immediately threw him off his game once the fight began.

“Royce came out (fighting) southpaw and then he started kicking at me. That’s what threw me off. I was kind of expecting some things they were trying to show me before the fight. I was expecting takedowns (and) a choke and a mount. I never knew what a mount meant or what a choke out meant.”

Royce submitted Jimmerson about two minutes into the fight. Ironically, Jimmerson said it was Gracie who felt bad for him afterward.