LowKickMMA.com
Home UFC News Anthony Pettis Down To Blaze Up With Nate Diaz After UFC 241... 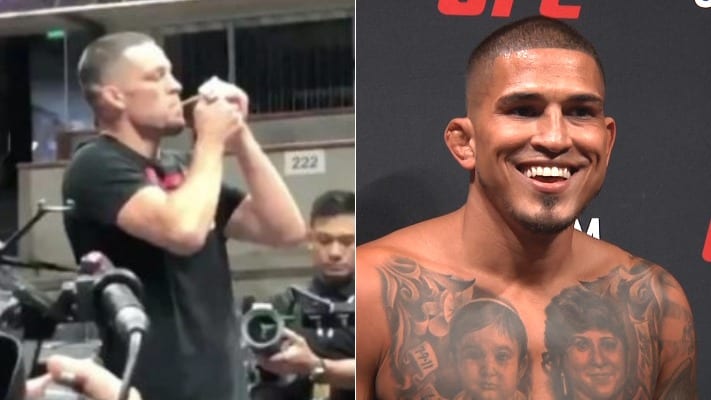 Nate Diaz scared a lot of fight fans this week when he sparked up a blunt during his UFC 241 open workouts.

Of course, it was later revealed the substance Diaz was smoking did not contain any THC, which is what’s prohibited for fighters while in-competition. However, even if he did test positive for THC, it wouldn’t cancel the fight. Diaz would’ve simply had to pay a fine, per ESPN’s Ariel Helwani.

Speaking to TMZ Sports recently, Diaz’s UFC 241 opponent, Anthony Pettis, was asked about Diaz smoking during his open workout. When asked if he’d be down to smoke with Diaz after their fight, Pettis responded with a “F*ck yeah.” (via BJPenn.com)

“F*ck yeah, hell yeah,” Pettis said. “Honestly, after this fight is done and there’s no beef, I’m going to settle it in the Octagon and afterward if we spark one up, we spark one up.”

When asked about Diaz smoking during his open workout, Pettis admitted he also smokes weed when he’s not in competition. He also isn’t worried about there being any repercussions, as he doesn’t believe Diaz was smoking anything with THC.

“That’s dope, I support that,” Pettis said. “I smoke weed too, but I can’t smoke with the fight coming up. I’m pretty sure he was smoking CBD since we have to get drug tested on Saturday.”

However, just because Pettis is willing to smoke with Diaz after their fight, doesn’t mean they’re cool with each other right now. There’s still a beef to be squashed, and once that’s done, he can put everything behind him.

“No, we’re not cool. Me and Nate are not cool,” Pettis said. “We never had any kind of relationship other than him throwing his middle fingers up at me. So if you ask me, I’m assuming we have a problem.

“But now after this fight unfolds, there’s no real problem. I feel like he’s jealous of where I was at in my career and where he was at in his career. He had the Conor McGregor fight, got his income up, got his followers up, and now he’s content.”

What do you think about Pettis saying he’s down to smoke some weed with Diaz after their fight?