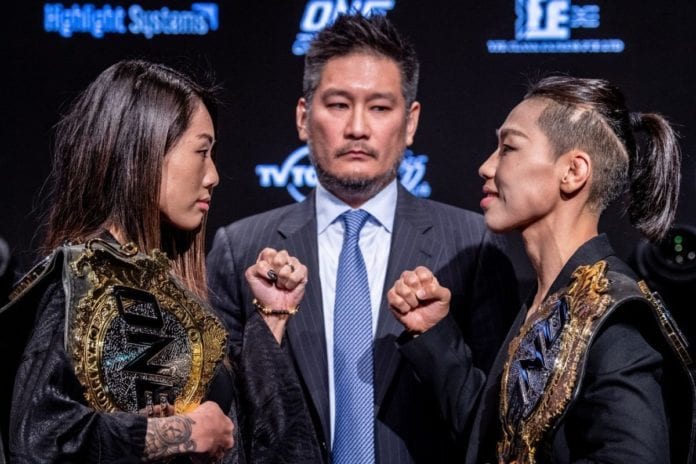 ONE Atomweight Champion Angela Lee looks set to return to strawweight in the near future, and she is already eyeing up a potential trilogy bout with the division’s reigning champion Xiong Jing Nan. The pair fought twice in 2019, with each fighter picking up a win in their respective divisions.

Xiong’s drew first blood with a TKO victory in March, following Lee’s move to strawweight. It was the first time the Singaporean had suffered a loss inside the ONE Circle. Lee evened the ledger six months later by submitting Xiong in the fifth-round of their atomweight title clash, and she is now looking to throw down one more time with her fiercest rival.

“After my last fight in October in Japan, I was like, let’s schedule the next one right now. I was so pumped and fired up. Not to make any excuses or anything, but my first match with Xiong, we had to postpone that,it was supposed to be in November of 2018 but got pushed to 2019 in March because of my back,” Lee said in an interview with Sherdog.

“I didn’t realize how much an injury like that can really affect your performance, but it does. I’m so stubborn as a fighter. I was just pushing it off; I didn’t want to do any physical therapy or anything. I just wanted to get back in as soon as possible. Obviously, I paid for it, but it was a good lesson.”

Lee’s next opponent is likely to be the Philippines’ Denice Zamboanga, who is next in line for a shot at Lee’s atomweight strap. However, if Lee can get past the surging Filipina, she wants to continue her quest to add a second belt to her waist.

The prospect of Lee and Xiong squaring off one more time will no doubt excite fans. The pair’s previous encounters were ultra-competitive affairs, and a final meeting between the two would make for compelling viewing.

Who do you think would win the rubber bout between Lee and Xiong?